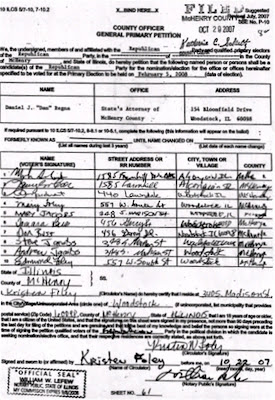 She got thirty-five signatures.

And, she held a Christmas party for former assistant state’s attorneys at which Regna was a special guest.

In short, Foley has put forth a significant effort.

Combined with her having filed the complaint against Bianchi with the Illinois Attorney General, it qualifies her for the title “Political Operative.”

And, surprise, surprise, guess who notarized all five of Foley’s petitions.

It was none other that McHenry County Republican Central Committee Chairman and Bianchi denigrater Bill LeFew. LeFew also holds the office (pardon the pun in the link) of McHenry County Treasurer.

He’s the guy who announced the existence of the letter.

It is little surprise that neither Foley nor LeFew wanted to talk to the Northwest Herald or the Daily Herald.

Of possible further interest is that

petitions 62 and 75 appear to have had different people fill out zip codes, county and state names. Note the upper case “N” in “McHenry” and “Illinois” and use of a different pen on that part of the form at the bottom, while the “n” in “Madison” above is in lower case. I’m no hand writing expert, but two different people do seem to have filled in blanks above the signature in these two petitions. Looks like it was LeFew. He uses upper case “N’s.” I wonder why. Maybe they were in a hurry on Saturday, October 22nd On pages 61, 63 and 74, it appears Foley did it herself. This was a few days after LeFew announced his resignation as chairman of the GOP central committee.

= = = = =
All images can be enlarged by clicking on them. You can see all of the petitions here.