Sheriff Keith Nygren felt impelled to write a rebuttal, a copy of which has been obtained by McHenry County Blog. It was FAXed from Nygren’s “MCHENRY CO SHERIFFS” office machine.

It contains some pretty harsh words, which, at minimum, are ironic considering Nygren’s endorsement of Regna late last week.

Although I have added paragraphs to make it easier to read, here’s what it said. (You can read the original, by clicking on the images of the document).

In an effort to support Glenn Gable, ASA Dan Regna has authored the attached letter that purports to voice his opinion and concerns about the Sheriff’s Department, County Board Members, and other Elected Officials in McHenry County as it relates to the office of the State’s Attorney.

As you read ASA Dan Regna’s letter it is clear that it an instrument to encourage a disruptive environment within the Sheriff’s Department, it assails the integrity of every Elected Official in county government, and brings into question the professional relationship between the State’s Attorney’s Office and those they are obligated to represent. 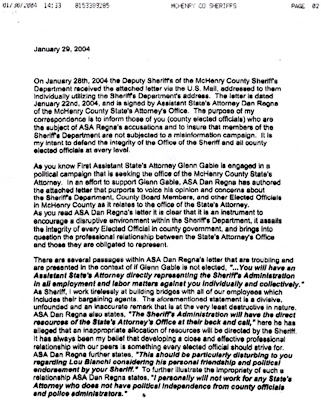 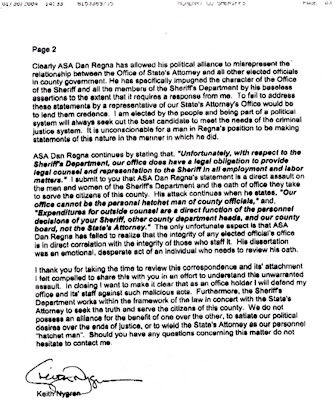 There are several passages within ASA Dan Regna’s letter that are troubling and are presented in the context of if Glenn Gable is not elected,

“…You will have an Assistant State’s Attorney directly representing the Sheriff’s administration in all employment and labor matters against you individually and collectively.”

As Sheriff, I work tirelessly at building bridges with all of our employees which include their bargaining agents. The aforementioned statement is a divisive, unfounded and an inaccurate remark that is at the very least destructive in nature.

”The Sheriff’s Administration will have the direct resources of the State’s Attorney’s Office at their beck and call,”

here he has alleged that an inappropriate allocation of resources will be directed by the Sheriff.

It has always been my belief that developing a close and effective professional relationship with our peers is something every elected official should strive fo.

”This should be particularly disturbing to you regarding Lou Bianchi considering his personal friendship and political endorsement by your Sheriff.”

To further illustrate the impropriety of such a relationship, ASA Dan Regna states,

“I personally will not work for any State’s Attorney who does not have political independence from county officials and police administrators.”

Clearly ASA Dan Regna has allowed his political alliance to misrepresent the relationship between the Office of State’s Attorney and all other elected officials in county government.

He has specifically impugned the character of the Office of the Sheriff and all the members of the Sheriff’s Department by his baseless assertions to the extent that it requires a response from me. To fail to address these statements by a representative of our State’s Attorney’s Office would be to lend them credence. I am elected by the people and being part of a political system will always seek out the best candidate to meet the needs of the criminal justice system.

It is unconscionable for a man in Regna’s position to be making statements of this nature in the manner in which he did.

”Unfortunately, with respect to the Sheriff’s Department, our office does have a legal obligation to hire legal counsel and representation to the Sheriff in all employment and labor matters.”

I submit to you that ASA Dan Regna’s statement is a direct assault on the men and women of the Sheriff’s Department and the oath of office they take to serve the citizens of this county. He attack continues when he states,

”Our office cannot be the personal hatchet man of county officials,”

”Expenditures for outside counsel are a direct function of the personnel decisions of your Sheriff, other county department heads, and our county board, not the State’s Attorney.”

The only unfortunate aspect is that ASA Dan Regna has failed to realize that the integrity of any elected official’s office is in direct correlation with the integrity of those who staff it. His dissertation was an emotional, desperate act of an individual who needs to review his oath.

I thank you for taking the time to review this correspondence and its’ attachment I felt compelled to share this with you in an effort to understand this unwarranted assault.

In closing I want to make it clear that as an office holder I will defend my office and its’ staff against such malicious acts.

Furthermore, the Sheriff’s Department works within the framework of the law in concert with the State’s Attorney’s to seek the truth and serve the citizens of this county.

We do not possess an alliance for the benefit of one over the other, to satiate our political desires over the ends of justice, or to wield the State’s Attorney as our personnel “hatchet man”. Should you have any questions concerning this matter do not hesitate to contact me.

The letters can be enlarged enough to read them by clicking on them.