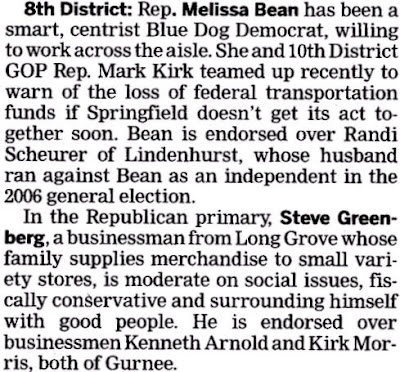 Melissa Bean has been a smart, centrist Blue Dog Democrat, willing to work across the aisle. She and 10th District GOP Rep. Mark Kirk teamed up recently to warn of the loss of federal transportation funds if Springfield doesn’t get its act together soon. Bean is endorsed over Randi Scheurer of Lindenhurst, whose husband ran against Bean as an independent in the 2006 general election.

In the Republican primary, Steve Greenberg, a businessman from Long Grove whose family supplies merchandise to small variety stores, is moderate on social issues, fiscally conservative and surrounding himself with good people. He is endorsed over businessmen Ken Arnold and Kirk Morris, both of Gurnee.

Expect to see the second paragraph on a Greenberg mailing soon.

Undoubtedly, Scheurer is disappointed that she was not identified as opposing Bean’s Iraq War stance.