Forewarned is forearmed, it is said.

I have received information from several extremely reliable sources who have confirmed that the MCC board will again try to gain approval to build a Health and Wellness Center, including a baseball stadium, from the City of Crystal Lake.

Specifically, I have learned from these sources:

There appears to be no plans to hire an independent 3rd party to evaluate.

Rather, the two vendors, Equity One and the McHenry Baseball LLC (not sure of the real name), and another vendor, ERA (who recently pitched the MCC Board on their interest in building community support for the HWAC Project), have been designated the evaluators for assessing whether this project would generate a positive cash flow. 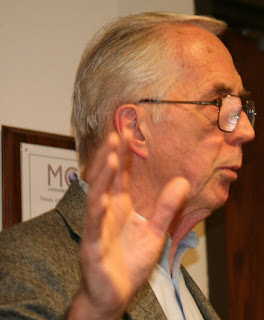 Note: ERA did the 3rd Party evaluation previously (in Mar/Apr 2007), but they had not been approached, nor indicated any interest in gaining additional business at that time, if the HWAC Project moved forward.

Thus, in essence, all three evaluators would have a financial benefit if the HWAC Project moves forward.

Board members [Donna] Kurtz, [Frances] Glosson and [Scott] Summers were against this approach because of the lack of objectivity inherent in this approach and requested an independent 3rd Party Evaluators.

Board members [Carol] Larsen, [Barbara] Walters, [George] Lowe, and [Mary] Miller over ruled this request and indicated evaluation by the 3 parties would be sufficient and objective.

= = = = =
Top right is Mark Houser, head of Equity One. He evaluated his buddy Pete Heitman’s baseball projections and pronounced them worthy. Heitman is the man in the smallest picture. Economics Research Associates’ Richard Starr, who headed up the devastating critique of EquityOne’s analysis, makes his pitch that his firm can do a better job in forming “partnerships” to build the stadium.