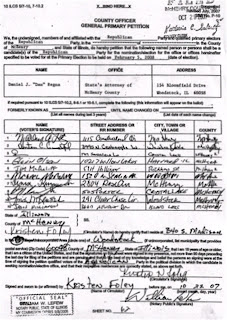 They were notarized by none other that Republican County Chairman Bill LeFew, the one who, along with defense attorneys who want to be able to cut deals again, have spearheaded the dumping of first term State’s Attorney Lou Bianchi.

Here’s what he wrote:

“Foley’s letter of complaint against Bianchi was dated two weeks earlier, Oct. 15, and received Oct. 23. Bianchi and Regna are the only candidates running Feb. 5 for the Republican nomination for McHenry County State’s Attorney.”

The article further points out that Bianchi asked for the resignations of all employees when he took office, but re-hired Foley. She later resigned.