This is the second in a detailed look at what Carpentersville District 300 officials told to and heard from area legislators on Tuesday morning. John Ryan chaired the meeting. School Board President Joe Stevens was the only other board member in attendance.

Stevens pointed out that 85% of the district’s operating budget was “on the local taxpayer. It just seems to me that there has to be some more money coming from the state.”

Citizens Finance Committee Chair Bob Schwab remembered how in 2004 he and Chief Financial Officer Cheryl Crates had gotten together and “actually dug down into the finance (thing).”

Referring to the resulting referendum and its affect on taxes, he said,

“We have had some fairly high increases in that direction.”

He praised the additional $2.8 million in state aid to education that resulted from the General Assembly’s increasing the foundation level by $400 per student, but he pointed out that the district only gets $500,000 for special education, a state mandate.

“It was a wonderful year for us,” Crates added later.

This is probably as good a place as any to point out that the year I voted for a telephone tax that resulted in District 300 getting an extra $6.2 million, there wasn’t even a thank you letter. The district swallowed it whole, with past officials continuing to complain there was not enough money coming from state taxpayers.

This is in start contrast to the number of times current legislators were thanked in writing and in person on Monday morning. 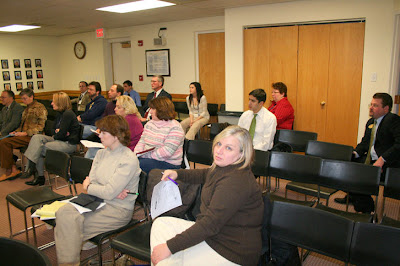 Schwab noted that District 300 would lose $1 million in transitional aid, which I took to mean the district’s share of the fast growth line item.

The district is now focusing on getting the teacher to student ratio to “28 or less.”

He also mentioned the establishment of high school departmental chairs.

“I understand the importance of them.”

If memory serves me correctly, they cost $1 million a year.

= = = = =
District 300 school board member John Ryan is on the top right; Joe Stevens, president of the board is on the right. Below explaining the district’s financial situation is Bob Schwab, Chair of the Community Finance Committee. Chief Financial Officer Cheryl Crates is on the bottom left. Some of those attending are seen in the bottom photograph.