Back to money in this series of articles of what happened when legislators were being briefed on District 300 by administrators and board members John Ryan and Joe Stevens, the board’s president.

“If it is renewed, it would cause us to go to a referendum a lot earlier,” Stevens said. “It would be disastrous.”

“Are you getting some (information) from Sears that they want it renewed?” State Rep. Mike Tryon (R-Crystal Lake) asked.

“In the House, current rules are that every single tax district has to sign off on it,” Munson explained.

No one brought up how much state aid to education would drop once the Sears TIF property got onto the assessment rolls.

And, more on money.

Chief Financial Officer Cheryl Crates explained that the charter school transitional assistance was supposed to be funded at the 90% level, but that in the past it was only funded at 50% of 90%. Now, it’s going to be 30% of 90%.

”One of the problems I see is that school districts can’t agree on what the formula should be. The non-tax cap counties complain about the tax cap(ped counties having the) tax cap double whammy fix(ed).

“Your voters do what they’re supposed to do and go out and pass a referendum, but lose state aid,” Tryon continued.

St. Charles State Rep. Tim Schmitz, who is being challenged in the GOP primary by Carpentersville’s James Krenz, related a comment from a Downstate legislator:

“You all keep passing those referendums. That puts more money back into the state aid fund.”

Schmitz also explained that every time legislation passes giving this part of the state’s schools more money there is a push back.

The fast growth aid is a direct reaction, although I doubt its sponsors are aware of it, of a bill passed by State Representative Julie Curry from Decatur.(Isn’t that where Arndt was before he came to District 300?) Its effect was to shift state aid to education to empty seats in schools with declining enrollments at the expense of sending it to growing districts.

So, empty classrooms Downstate were getting money while full ones in Huntley, for example, were getting nothing in state aid.

I was one of the few to speak against that bill on the House floor. Of course, it could not have passed, if Chicago area legislators had voted their school’s self interest.

There then ensued a discussion about the chances for a capital projects bill.

“The good news about the failing economy is that the Democrats may use it (a capital bill) as a jobs (bill),” Munson observed.

“Will we lose federal money?”

“We’re not sending money back to Washington.”

He indicated that a capital bill will be passed that will at a minimum make sure the federal money is not lost. Since Schmitz is on Minority Leader Tom Cross’ leadership team, I would imagine that his analysis is correct.

“Some people actually thought we were crazy,” Stevens said.

My last notes are about money.

Crates pointed out that the district was $27 million in debt in 2004.

“It’s not a whole lot,” she admitted. 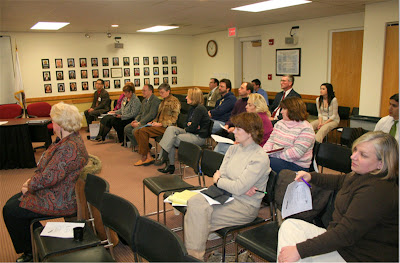 On the top of the article are photographs of District 300 school board member John Ryan and School Board President Joe Stevens. Immediately below are State Representatives Ruth Munson and Mike Tryon. Tryon can also be seen gesturing with his hands up just below. State Rep. Tim Schmitz is gesturing with his hands out down a bit to the left. Another head shot of Munson is below Schmitz and a head shot of Schmitz is seen to her right. Stevens appears again in the bottom left photo, while Chief Financial Officer Chery Crates is seen pointing to a screen talking money. Another shot of the audience is seen next to the photo credits. All photos can be enlarged by clicking on them.