Here is the third installment of Jane Collins letter of advice to McHenry County College board trustees.

It concerns secrecy, a topic the board knows a lot about.

On October 16, 2007, and on several subsequent occasions leading up to the October 22, 2007 Committee of the Whole [COW] meeting, four of the District’s trustees violated the Open Meetings Act.

They did so knowingly and willfully, believing that by their conferring “individually and not as a group” (Carol Larson, December 20, 2007) on the means and ways to punish/censure two District trustees, they could skirt the Open Meetings Act [the Act] requirements. 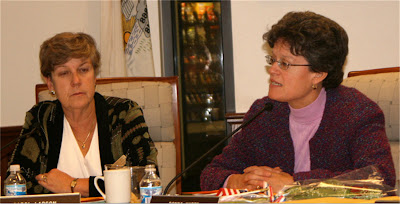 According to Trustee Larson, the [four] trustees first decided “they had to do something” after trustees Summers and Kurtz spoke at the October 16, 2007 City Council meeting. The District’s Chicago legal counsel was consulted and asked to provide a template for censure resolutions. Then followed communications among the trustees on the resolutions’ content, and when and how they would be presented for approval.

Trustees Summers, Kurtz and Glosson were excluded from these communications, according to minutes of the Committee of the Whole [COW] meeting on October 22, 2007.

Evidence that these “meetings” on a District matter took place: four of the trustees appeared at the October 22, 2007 COW meeting with a prepared statement and resolutions, stating it was their intention to have them approved that evening.

These resolutions were not on the publicly noticed agenda nor on any revised agenda. There is no public record of their being considered by the District Board at any prior public, open meeting. 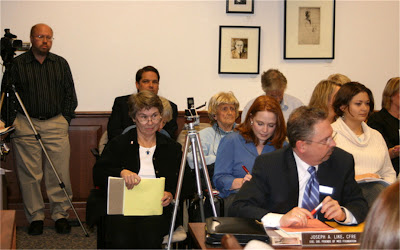 This willful violation of the Act was done with full knowledge of what the Act requires. At at least one Board meeting, Counsel Metz cautioned the Board that even if they communicated about a District matter singly/individually, if the end result was three or more trustees’ conducting District business outside a publicly noticed and properly convened open, public meeting, this constituted a “meeting,” violating the Act. 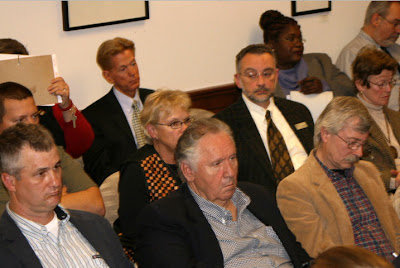 President Packard knew about these communications, and that they violated the Open Meetings Act. Freedom of Information documents show that without prior Board discussion, appropriation or approval, President Packard talked with and engaged Wayne Newton, a mediator, to attend a Board Committee of the Whole meeting on October 22, 2007 at a cost of $3,000.00 plus travel expenses.

for a “half day retreat.”

The October 22 agenda does not list Mr. Newton as a visitor; it does not list him as a presenter or as connected to an item for consideration. 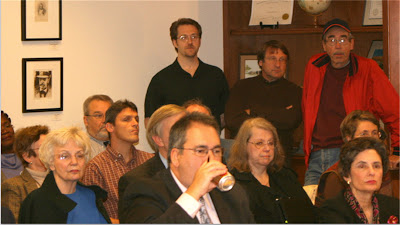 he October 22 minutes do not provide an introduction or explanation of his presence at the meeting, although he made a presentation.

There is no public record showing the Board had approved a “half day retreat.”
Nor is there any public record showing that such a “retreat” took place. What is unclear: whether there was a “meeting” of some trustees with Mr. Newton prior to the COW meeting. (“When I met him [Mr. Newton] at dinner that evening, I did not talk to him about the censure. We talked about corn.” Carol Larson, December 20, 2007.)

Whether Counsel Kerrick was present at or informed of these illegal communications while they were taking place, and if she tried to stop them.

On October 25, 2007, when the question of Open Meetings violations on this matter arose, Counsel Kerrick attempted to excuse trustees who may have first discussed how to punish the two trustees on October 16, 2007 after the Crystal Lake Council meeting.

She asserted that the trustees were in a meeting on that date. This is incorrect.

Even if the censure discussions among four trustees took place only that evening – which is not the case, according to their own admissions – they were not in a District meeting that evening.

Although the District purported to have held a special meeting on October 16, with a notice, agenda and minutes, the formalities of a properly conducted public meeting were not met.

This was not a joint meeting with the City of Crystal Lake Council; the District Board chairman did not convene the meeting; no District business was conducted; nor did the chair adjourn the meeting.

The District trustees were merely in attendance at the council meeting at which a District petition was considered by council members; Mayor Shepley convened, conducted and adjourned the meeting pursuant to the City of Crystal Lake’s agenda. 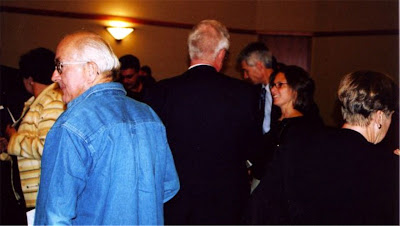 It is not clear whether any of the four trustees consulted with Counsel Kerrick about the censure resolutions prior to the October 22, 2007 COW meeting.

At the October 25, 2007 Board of Trustees meeting, she asserted that the four [censuring] trustees “had not met with legal counsel.”

It is difficult to document violations of the Open Meetings Act. These details were pieced together over a long period of time. Although the Board refuses to record its open sessions, the public has attempted to cure this deficiency by posting recordings on the Internet. Recordings of the October 22 and 25, 2007 meetings may be found here. 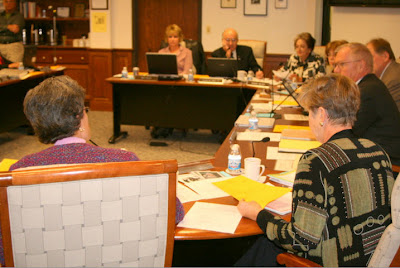 To be hand delivered with attachments to the District Board on January 17, 2008.

The next five pictures, including the audience shots, were taken the night of the censuring of Trustees Scott Summers and Donna Kurtz.

The head shot on the left below the audience photos is of MCC attorney Sandy Kerrick on January 21, 2008, the last night a week before flash photography was banned. Notice how crisp the picture is.

October 16, 2007, the night MCC failed to obtain zoning approval for its baseball stadium proposal, is when the following two pictures of MCC board and staff were taken. This is the night when the board asserts it held a public meeting. The first picture was taken as the Crystal Lake City Council was rejecting the zoning change. The second shortly after while college officials were conferring outside in the hall.
The final picture is of citizen Leona Nelson, who was censured herself by the Crystal Lake Park District for supposedly revealing something that was discussed in closed session (not illegal) and sexual harassment, handing MCC Trustee Donna Kurtz a rose and an American flag after she and Board President Scott Summers were censured by a 4-3 vote.