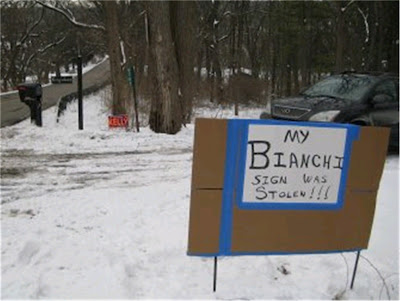 I don’t know where Carolyn Cox lives, but I do know that I received a recorded telephone call from her Thursday containing the same supportive message of McHenry County State’s Attorney as was found on a direct mail piece I received late last week.

Her sign supporting Lou Bianchi has been ripped off its backing right in front of her home.

Strangely, a small yard sign for Richard Kelly for McHenry County Auditor remains standing. (Click to enlarge. It is close to the mailbox,)

Pictures have been sent to me of what replaced the Bianchi sign by the Cox driveway. 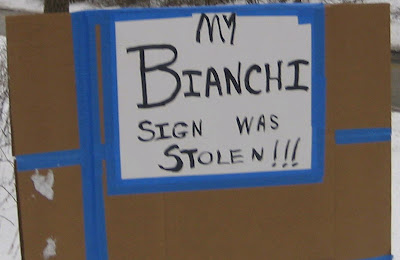 Do you think some supporter of Dan Regna, Bianchi’s opponent, was so disturbed at the Cox support for Bianchi that he or they wanted to deliver a not-so-subliminal message of “We know where you live?”

If so, I hope she has a couple of junk yard dogs roaming around her home.

Well, there may be more signs taken down the night before the election.

That was the threat made, wasn’t it, when property owners took down Regna signs next to Bianchi signs for which Regna supporters did not have posting permission?

And some of us know who made the threat.

who send an endorsement letter for Regna in the mail last week and another door-to-door in my Algonquin 7 precinct Saturday,

will make certain his patrols are on the lookout for the type of people who might try to violate the Freedom of Speech rights of people to post signs of political support on their own property.

I left the Regna literature at the doors where I found it, by the way. A couple of people said they had no desire to look at it, however, just as I am sure that some homeowners would not want to look at my precinct letter, entitled,

If It Is Between Romney and McCain

= = = = =
My friend Jim Bishop stopped over to chat about the state’s attorney’s race when he saw me and my wife out shoveling the driveway. He is a supporter of Regna and gave me his best arguments.

I asked him about the Regna sign that was there and then not. He told me its support posts had been bent over to the ground.

Guess there are unethical folks playing sign games on both sides of the contest.