Yesterday McHenry County Blog published the first half of an article on U.S. Senator John McCain’s rally at the Odeum in DuPage County. Today’s installment resumes where it ended.

The most interesting introduction was of former Governor Jim Thompson.

He was beaming when State Rep. Jim Durkin mentioned his name.

But no one could see him because he was standing at the bottom of the stairs to the stage.

So, later McCain brought him on stage.

Take a look at the smile on his face as he was being introduced the first time, even though virtually no one could see him.

This is the first I have heard of him since the extensive television coverage when he drove with his former Lieutenant Governor George Ryan to prison near the Wisconsin Dells.

History tells us that Thompson likes to have a say in who is United State’s Attorney.

I wonder if he knows that McCain has said he will retain Patrick Fitzgerald, while Mitt Romney has indicated he will sack Fitzgerald.

Not just in response to my question eleven and a half months ago, but to the Chicago Tribune.

Borling is one of McCain’s 16th congressional district delegates.

McCain’s wife Cindy told of how she spent time at Mother Teresa’s orphanage in Bangladesh.

One little girl took a liking to her and the feelings were reciprocated.

As she was about to leave, Mother Teresa told her that she could make a difference in the little girl’s life, urging her to take her back to the United States.

As she was sitting on the airplane, she was wondering how she was going to tell her husband of her decision.

She got off an airplane with the girl in front of a crowd about the size of Friday night.

She said McCain asked her where she was going to live.

“I thought she could live with us,” she replied.

It so reminded me of the starfish story by Loren Eisley. Our First United Methodist Church of Crystal Lake’s senior Pastor David Seyller used the story just last month.

You can’t save all of the starfish on the beach, but you can save one at a time.

And he accepted her suggestion.

I’ve heard this story twice now.
Once from McCain’s lips while his wife stood at the side of the Union Club conference room 11½ months ago and Friday night from his wife.

From his expressions in the pictures above, his wife’s decision seems to still affect him deeply despite his having heard his wife tell the story numerous times.

McCain said something my wife has said repeatedly,

“Don’t you think we ought to give a little credit to the President for not having had another 9-11?”

He told of a New Hampshire mother’s asking him if he would wear a bracelet with her son’s name, as she asked him to make sure that he did not die in vain.

You can see it on his right wrist.

And what will McCain do if he is the Republican candidate?

After the speech, McCain came down off the stage and started shaking hands and signing yard signs, books, a photograph, whatever people could find upon which he could write. 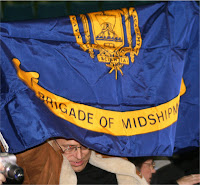 The camera folks had a field day.

After taking some from the floor, I got the chance to get on the stage and shoot down. It was an interesting experience.

One man was waving a Naval Academy banner that said, “Brigade of Midshipmen.”

Although he was standing on a riser, I’m not sure McCain could see him in the rush of people trying to get his attention.

The only other time I have been in a similar situation with a presidential candidate was 1960. The Oberlin College Young Republicans participated in a very close to election torch light parade in Cleveland.

Vice President Richard Nixon’s convertible drove by us and I got to shake his hand. As I suggested, it was near the end of the campaign, maybe even the Saturday before.

What I remember is that Nixon’s hand was puffy.

A woman in a red outfit, including a red hat, had made a pillow for McCain.

She profusely thanked him while standing on some seats. I doubt he heard her, but others in front of her did and cleared a path so she could give it to the Senator.

First, though, a female aide had her remove the stuffing.

The Senator got the pillow sans stuffing.

As I was walking out of the stadium, I heard a guy say, “So, people came out.”

“Yeah, it was actually really crowded,” his companion replied.

In the foyer, volunteers were handing out yard signs.

Literature was available on a table.

Before the rally when I saw it and expressed surprise, one of McCain’s staffers said,

“Yeah. What a difference a week makes.”

Of course, having literature on the Friday night before a primary is not good timing if you want precinct committeemen to distribute it.

I parked next to a a couple whose car had a McCain bumper sticker and a North Carolina license plate.

I asked them if they were McCain groupies, wondering if they had driven from North Carolina for the rally.

Turns out they were Mormon and had driven all the way from East Moline. The wife told me that she didn’t think Romney was representing Mormon principles properly.

All pictures can be enlarge by clicking on them. For more McHenry County Blog, click here.