State Senator Adeline Geo-Karis and I were elected to the Illinois House the same year—1972. She died this week.

I first became aware of Geo-Karis at a 12th Congressional District Women’s Club that she chaired after losing the 1962 Republican congressional election to State Senator Bob McClory.

My mother attended its meetings and took me along one time. McClory was McHenry County’s congressman and the man whom I unsuccessfully challenged in 1980.

When picking our seats in the Illinois House, I got almost last choice. They were assigned alphabetically, still an accepted form of discrimination.

I decided to sit right down front. Right in front of the clerk’s podium. I had supported Bob Blair for re-election as Speaker, much to his surprise. (He had fired me as an appropriations staffer when he first won the office in December of 1970, two weeks after I had been hired.)

I figured if we had a falling out he would have a hard time ignoring me.

Adeline Geo-Karis sat right behind me on the aisle.

It was an interesting experience.

“Why Adeline?” replied the guy with a red light on.

People were explaining their votes, stalling for time, trying to find enough votes to pass the bill. That practice is no longer allowed.

“Tell me why, Adeline. I still have time to change my vote.”

But she never figured out that exhortation was not the way to get me to change my vote.

After I left the House to run against McClory (I carried McHenry County; he got Lake and Kane, the two larger counties) and got divorced, whenever I saw her, Geo never failed to ask if I had seen my little girl. 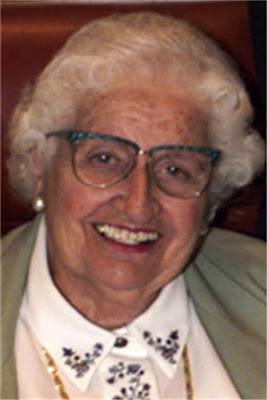 That’s the kind of person she was.

She knew what mattered most to you and, with that bond, re-established her relationship with everyone she knew.

I last saw her in Fox Lake at the Grant Township Republican Lincoln Day Dinner in 2006. That’s the one when Judy Baar Topinka, another excellent person-to-person campaigner, kissed me twice.

She was sitting down. Her walking the entire length of every parade days were over.

I wished her luck.

It is just incredible how Lake County Republicans treated her.

She lived for the office.

They should have let her decide when to leave it, even if it were going down to election defeat to a Democrat.

But, Republicans don’t have a good record of treating fellow Republicans compassionately, do they?

She was such a good egg, not to mention a grand lady.

Her funeral will be at 10 AM Saturday at Illinois State Beach Park, which is named for her. Visitation is from 4-9 PM Friday at the same location and from 9-10 AM Saturday before the funeral.

= = = = =
The pictures are from 1974, Geo’s and my first terms in the General Assembly. It’s from this article, which tries to identify other legislators. You can see State Rep. Adeline Geo-Karis on the lower right hand corner of the top two photos. She is in the middle of the bottom photo. A much thinner me is walking in front of her. The head shot is from the Illinois General Assembly web site. You can enlarge the photos by clicking on them.