Warning: Parameter 2 to wp_hide_post_Public::query_posts_join() expected to be a reference, value given in /srv/users/serverpilot/apps/wordpress/public/wp-includes/class-wp-hook.php on line 292
 How About Putting the Barack Obama Presidential Library at NIU? - McHenry County Blog ↓
McHenry County Blog Home 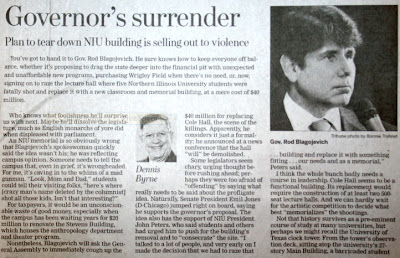 The Chicago Tribune’s prominent placement of Dennis Byrne’s column on Governor Rod Blagojevich’s plan to memorialize the Northern Illinois massacre by tearing down Cole Hall and spending $40 million to replace it and build an on-campus memorial inspires another idea.

Why not put the Barack Obama
Presidential Library there?

After all, Senator Obama went to the NIU massacre memorial service.

His presidential library doesn’t have to be in Chicago. DeKalb is pretty close. The senator represents all of Illinois.

At least private donors would be picking up most of the cost.

And putting his presidential library in DeKalb would help change the image of the campus.

I’ll have some thoughts about the NIU massacre memorial here on Wednesday and Thursday.