Warning: Parameter 2 to wp_hide_post_Public::query_posts_join() expected to be a reference, value given in /srv/users/serverpilot/apps/wordpress/public/wp-includes/class-wp-hook.php on line 292
 Of Monuments of Remembrance – Part 2 - McHenry County Blog ↓
McHenry County Blog Home

Part 1 of this article can be found here.

The Wednesday before last, when I was computer-impaired because of Microsoft’s Vista, Governor Rod Blagojevich agreed to the suggestion of the NIU president to use $40 million to tear down and replace Cole Hall, where the massacre took place, and build another lecture hall and an on-campus memorial in its place.

Maybe it is because I was on the House Appropriations Committee through which big capital expenditures flowed in the 1990’s, but I immediately thought of how much $40 million would buy.

It would have been bought 40 right-turn lanes back at the turn of the century.

It would go a long way toward re-building and widening Route 31 between Crystal Lake and McHenry, surely the most needed road improvement in McHenry County. (And, yes, leaves have been on the trees sometime in the distant past before Narnia’s White Witch turned our area into what seems like a perpetual winter.)

Then, Sunday morning, I woke up thinking of how $40 million (or, maybe it was only $20 million in the late 1990’s) would have paid for an underpass in Fox River Grove. Fox River Grove is the only town on the Union Pacific main northwest line without any underpasses or overpasses.

Even though the state managed to come up with money for an overpass for Cary in the 1990’s when Route 14 was widened, as you can see above, and Metra officials discussed an overpass in Fox River Grove, it was apparently too much money.

That would have been an appropriate memorial, it seemed to me.

There is a rock with bronze plaques on two sides at the accident site that this little girl is looking at with her mother watching her. 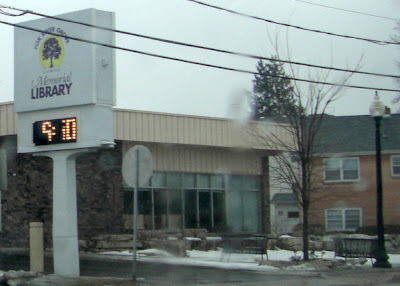 There is also a small plaza in front of the library a block away built with donations and some legislative initiative money, otherwise, known as “pork,” from my allotment.

I think most of the $40 million the NIU president and Governor Blagojevich propose spending tearing down and replacing Cole Hall and building a memorial could be spent better elsewhere.

Instead, in addition to a memorial on campus, why doesn’t Governor Blagojevich build a memorial sign over the tollway before the NIU exit (built on land I have been was owned by former Republican State Senator Dennis “Denny” Collins)?

One something like the one you can see to the left of the photograph at the O’Hare Oasis above.

Then people off campus could be reminded of the tragedy, too.