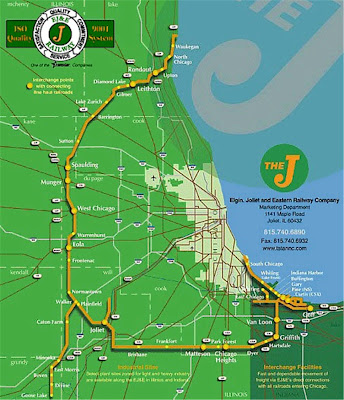 I find it fascinating that Canadian National, the railroad that wants to skirt Chicago’s track bottleneck by buying the circumferential EJ&E Railroad has found McHenry County Blog.

I got an email this past week alerting me to its detective work.

Yesterday, a copy of a letter to U.S. Senator Dick Durbin and Congresswoman Melissa Bean offering a concession to Amtrak and offering to continue working with Metra on a North-South commuter line. It also agrees to $40 million in grade crossing mitigation.

Nothing for local residents who might have to sit behind behind railroad crossing gates in Downtown Barrington or Cuba Road, but it does seem to indicate some negotiating room.

It is interesting that CN President E. Hunter Harrison goes to where he perceives the power lies—the Federal government.

Of course, he is right. Local folks have precious little power in matters like this.

But, that won’t stop them from putting up a fight.

“build(iing) a new rail line further outside the metropolitan Chicago area in lieu of acquiring the EJ&E,” say, in McHenry County or points west.

The Lake Zurich Cuba Road grade crossing picture and those of Durbin and Bean, are, of course, not part of his letter): 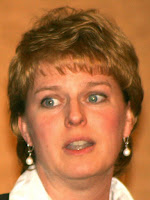 Thank you for meeting with me on March 5 to discuss CN’s proposed acquisition of the major portion of the Elgin, Joliet & Eastern Railway (EJ&E). I appreciated having the opportunity to present CN’s perspective on the importance of this transaction to efficient rail transportation in the Chicago region.

I must say, however, that I was disappointed by your mischaracterization in your joint press release of the outcome of the meeting. You expressed concern about the transaction in three areas, and in all of these areas, as described below, I believed our discussion was productive. 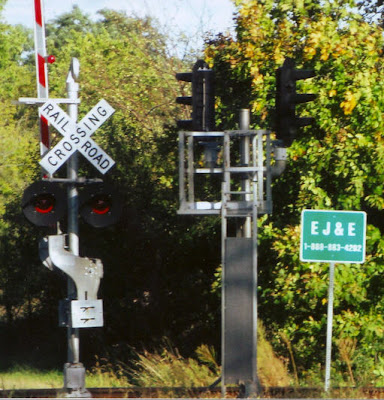 Amtrak – CN committed last month to allow Amtrak to remain indefinitely on the St. Charles Airline after CN’s trains are rerouted off of this line onto the EJ&E, thereby preserving Amtrak’s access to Chicago’s Union Station and Amtrak’s ability to continue to provide service to and from downstate Illinois points such as Champaign and Carbondale. To remove any uncertainty for Amtrak about the maintenance costs for which they would be responsible after CN ceases freight operations on this line, I agreed during our meeting to cap the costs to Amtrak for maintaining this line at the current level, indexed for inflation in future years. CN has conveyed this commitment to Amtrak as well.

Metra – Contrary to the statement in your release, this transaction does not endanger Metra’s proposed STARLine. CN remains willing to work with Metra on the STARLine and is willing to explore all options for this service, including the use of enhanced EJ&E rail lines. As we discussed, the timing and implementation of STAR Line service remains subject to numerous variables, including securing government funding, but CN is committed to continuing our positive discussions with Metra on the STARLine.

Community Impacts – CN recognizes the effects of increased freight train traffic in the communities along the EJ&E line, and CN is meeting with these communities to discuss a range of reasonable mitigation options that will enable the transaction to proceed while also addressing community concerns.

At the same time, we are fully cooperating with the Surface Transportation Board (STB) as it considers our transaction and prepares its Environmental Impact statement.

As I mentioned during our meeting, the respective specific mitigation measures that will be needed in each community are still being determined, but CN anticipates investing roughly $40 million for mitigation efforts. In response to your suggestions that CN either fund all mitigation for communities along the line, whether or not the requests are reasonable, or build a new rail line further outside the metropolitan Chicago area in lieu of acquiring the EJ&E, I said that CN could not agree to such proposals. CN will, however, entertain all reasonable mitigation requests, and we are engaged with local stakeholders to this end. I would hardly characterize CN’s active efforts with communities as showing “indifference” to community concerns, as your press release charges.

At the end of our meeting, you both asked that we keep the dialogue open as this transaction proceeds through the STB process. I am happy to continue to engage in such dialogue. I would only ask, however, that you consider the broader public interest as well as the needs of specific communities as we seek to develop solutions that will meet community needs while also reducing rail congestion in the Chicago region and enhancing the efficiency of rail operations.