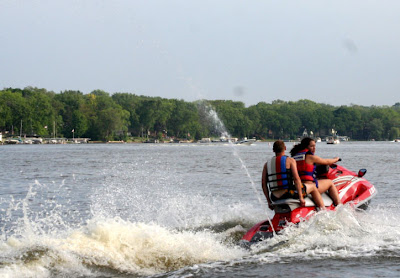 The meeting, Hammerand wrote, will be Tuesday, March 18th at the Administration Building, 667 Ware Road, Woodstock (east of Seminary on the north side of the road).

“There are misrepresentations in photo 1 & photo 3. Photo 1 is a picture of a boat lift that is being prepared for winter storage in anticipation of a scheduled drawdown to complete scheduled dam repairs,” 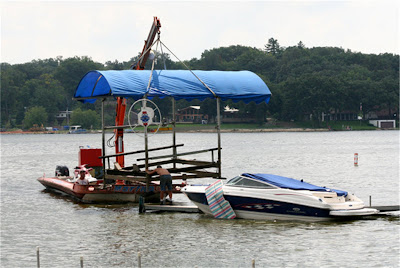 Actually, the photo is dated August 10, 2007. That was when Crystal Lake was experiencing flooding, so it should be no surprise that Wonder Lake was high enough that my father-in-law’s neighbor might have had trouble with his Shore Station. Above you see the 5th in a series of photos I took as the barge moved the Shore Station from one side of the pier to the other. 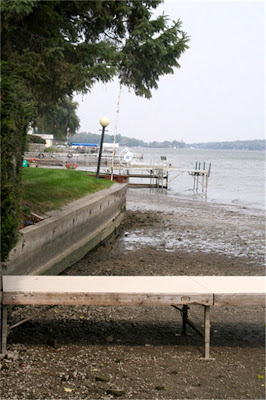 “Photo 3 is one of several shallow shoreline areas that were exposed during the drawdown that began in early September. The drawdown ended in October and the lake was back to normal pool before the end of that month. The MPOA does does not drawdown our lake for the winter. Too bad Mr Hammerhand didn’t check the facts prior to his posting.”

It was mine. I didn’t return to my in-laws’s home after I took the low water photograph on September 21st of last year.

I just threw the Wonder Lake jet ski photo as a way to help people get through the winter.