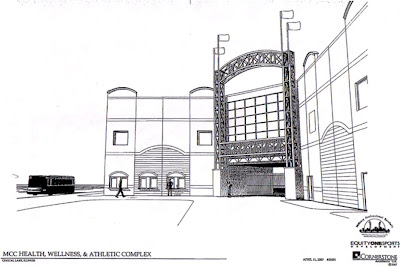 2. Allow competition, that is, don’t freeze out the competition before deciding on a baseball promoter, as was done last year.

3. Have the promoters make public pitches at a hearing at which both the public and board can ask questions. Put the people testifying under oath. College board members and officials have experience with such a process. It occurred when they appeared before the Crystal Lake Planning and Zoning Commission. If they would like to avoid the appearance of a conflict of interest, who knows, Tom Hayden, the man who conducted the eminently fair hearings on the MCC zoning request, might be willing to act as a hearing officer. And, if the college would be willing, the hearing could be probably be conducted at the city council chambers where it could be filmed for broadcast on cable television throughout the district.

4. Require all petitioners to reveal everyone who has beneficial interests in their teams. Krug agreed with that.

5. Require a conflict of interest certification that none of the college trustees or officials or members of their immediate families have any beneficial interest, including, further consulting contract(s), etc., with immediate disclosure of any such contract on the part of any of the applicants. Forfeiture of the lease would be the consequence. 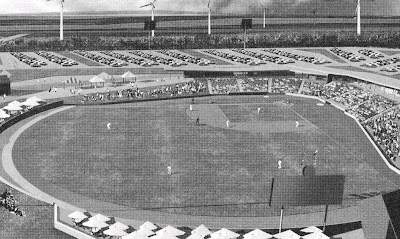 6. Require the the promoter to pay for the stadium and ground rent that does not amount to a sweetheart deal. The Economics Research Associates re-do, corrected after read by McHenry County College President Walt Packard reports on page 22 that the team in Lincoln, Nebraska, “contributed $10 million towards the construction of the stadium, which was considered prepaid lease payments for 35 years, or an average of $285,000 per year.”

7. Require the quantification of any public subsidy, including, but not limited to road improvements.

There is one other idea that Economics Research Associates consultant Richard Starr came up with out in the hall. He suggested building condos surrounding the stadium so people could watch the games from their porches and windows.

Read Part 1 of “If I Supported a Baseball Stadium…”

Read Part 2 of “If I Supported a Baseball Stadium…”

= = = = =
On top is a rendering of what the front of Pete Heitman’s baseball stadium would look like. At the bottom is an aerial view of the proposed Harvard stadium. The head shot is of Crystal Lake Planning and Zoning Commission chairman and former city councilman Tom Hayden.