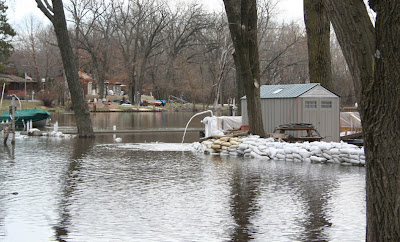 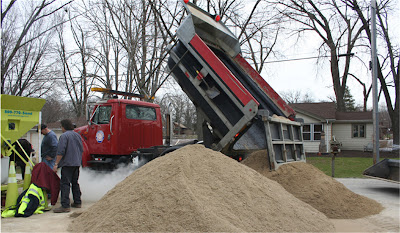 NASA Education employees and those of two other Blanchard companies headed to the Orchard Heights subdivision to join Mary Donner and Nunda Township workers.

Under the leadership of Township Road Commissioner Don Kopsell, they filled sand bags so that local residents could do what they could to save their homes from the rising Fox River. 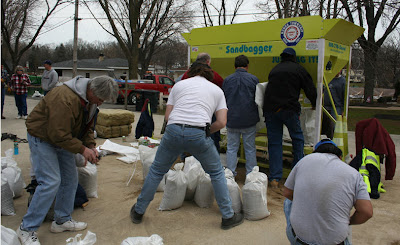 The township had just purchased “The Sandbagger” on Monday, April 1st, for about $18,000

The Sandbagger is a machine that is loaded with sand and then through 4 pour spouts Blanchard’s team is able to produce bags filled with sand, which are then tied off and stacked for the local home owners to use 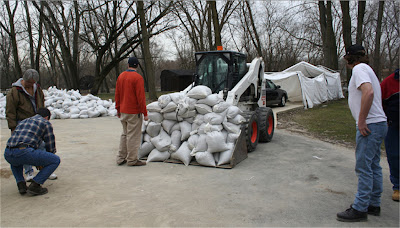 It was taken to Riverside Drive in McHenry.

Bayview Beach was also at risk.

Wednesday afternoon the river was rising at approximately 2 inches an hour. 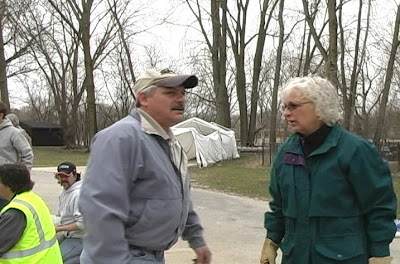 “This isn’t something that can be finished in an hour or two, but will be ongoing for quite a while until the water starts to subside,” Blanchard said. 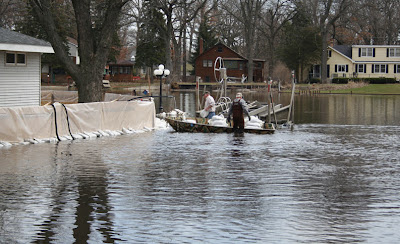 Kane County supplied approximately 120,000-130,000 bags. McHenry County only had about 20,000-30,000 bags on hand, requiring Nunda Township to go out and purchase additional bags from an outside source. 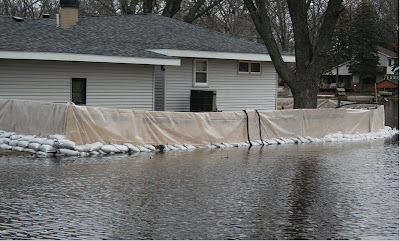 NASA Education is a Crystal Lake-based, 501(c)(3) nonprofit organization that provides comprehensive workforce and community reintegration services for U.S. veterans who are displaced, disabled, homeless or otherwise in transition.

= = = = =
Pictures from NASA Education. They are of the effort of prepare sandbags to protect Orchard Heights homes in McHenry, Illinois. The two people whose faces can be seen in almost the lowest photo are NASA Education President John Blanchard and McHenry County Board member Mary Donner.