First, she says she will. 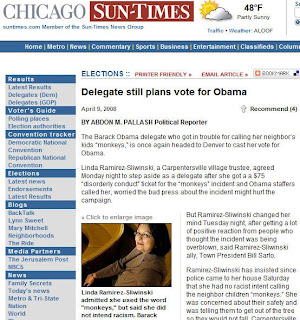 Then, she says she won’t.

It’s so hard to keep up with this story, I won’t even try.

Chicago Sun-Times columnist Richard Roper weighed in on the issuance of a $75 ticket by Carpentersville Village Police to Trustee Linda Ramirez-Sliwinski for calling two neighbor African-American boys climbing in a tree “monkeys.”

And, instead of relinquishing her primary election earned privilege to cast a Democratic Party National Convention vote for Barack Obama, as Obama operatives desired, the Mexican-American village official is now saying it’s on to Denver to cast that vote. 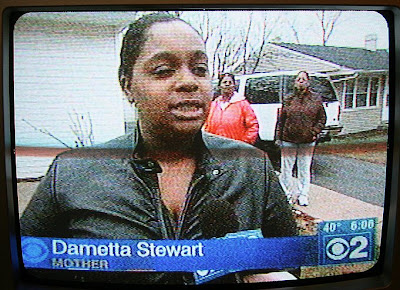 “Ms. Ramirez-Slawinski is an elected delegate, and we respect her decision to represent the campaign at the convention. It is clear that the incident was a mis- understanding.”

“Misunderstanding” is certainly not a word I heard from her neighbor Damatta Stewart Tuesday night on TV.