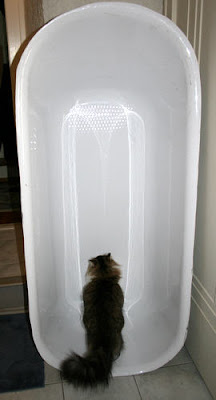 No, you do not have permission to relieve yourself on Crystal Lake Mayor Aaron Shepley just because he passed his 75% sales tax increase.

I know you want a larger litter box, Keely, but you are not going to get our new tub liner (for which we shall not pay Crystal Lake sales tax).

It looks as if Keely is standing up and doing, well, you know what.

It reminds me of visiting Washington, D.C., as a kid. I think that was when we saw President Truman crossing Pennsylvania Avenue from Blair House, where he was living while the White House was being renovated. We were standing right in front of what is not called the Old Executive Office Building, where I ended up working as a budget examiner right out of the University of Michigan’s public administration grad school for the U.S. Bureau of the Budget.

For some reason my little sister Janet (two years younger than I; I couldn’t have been more than 6) went into a Men’s Room with us.

She saw urinals covering the side of a wall.

“Daddy, why are the bathtubs standing up?” she asked.