This is the second article on this suit. Here is the one published yesterday:

For the first time while Lou Bianchi has been McHenry County State’s Attorney, he has filed suit against a local governmental entity for breaking the Open Meetings Act.

On February 28th four people, myself, Kim Willis, Jane Collins and Iris Bryan, were evicted from the building prior to the end of the meeting, which lasted until well after midnight. 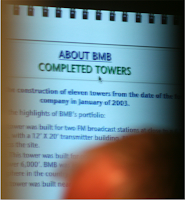 The flow of events cited in the complaint are as follows:

The board went into secret session about 9:30.

“…a short time later, security officers were called to the boardroom where said meeting was taking place to assist in talking with an individual, Cal Skinner, about not taking photographs through the windows of the boardroom while the proceedings were in closed session. 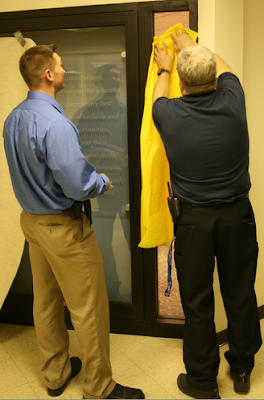 “…shortly thereafter, McHenry County College President (Walt) Packard, called the head of security, Harriet Johnson, and asked her to send a security officer to the boardroom to cover windows for the closed session because Cal Skinner continued to take flash photographs through the window of the proceedings which was purportedly causing a disruption to the closed session. Security then assisted in covering the windows of the boardroom. 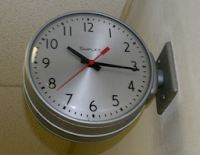 “…around approximately 10:00 p.m. Security Officer Daniel Wrobleski and Security Officer William Schultz advised the four citizen, Kimberly Willis, Jane Collins, Cal Skinner, and Iris Bryan, who had been attending the meeting and were standing outside the boardroom waiting for the closed session to end, that it was after 10:00 p.m. And the college was closed to the public, and they would need to leave the building. 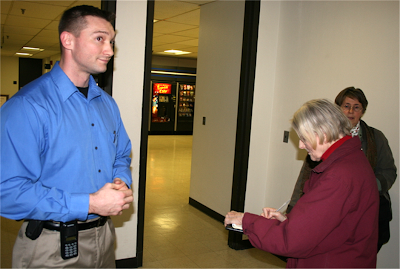 “…Officer Schultz stated to the individuals that if they did not leave they would be issued trespassing violations.

“Thereafter, the four individuals were escorted to the exit doors and forced to leave the building…

“As a result of the conduct set forth above, these four individuals and any other member of the public, were denied the right to be in attendance for the duration of the public portion of the meeting after the closed session and until adjournment.

‘all meetings required by this act to be public shall be held at specified times and places which are convenient and open to the public.’”

The assistant state’s attorney on the case is Mamie M. Rein

Jane Collins, one of those evicted filed a complaint with the state’s attorney’s office. I asked her to comment on the suit and here is what she wrote:

“I continue to believe that the selective expulsion of 4 constituent taxpayers from a publicly owned property was not done for security purposes, but to shield the broadcast tower proponents from any further public scrutiny and photographing by Cal Skinner after the closed session concluded.”

Here is the reaction of Iris Bryan, who writes the Town Crier:

It is sad that it was necessary to take the issue to legal heights with the need to go through court proceedings when the situation has been resolved by the College, as evidenced by a Board Policy Revision, to be enacted by the Board at its meeting this evening. 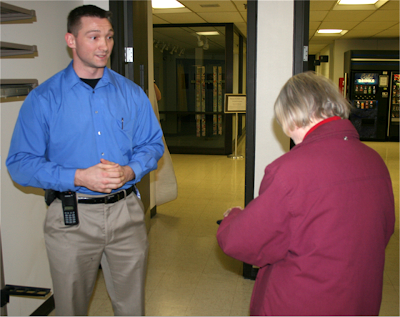 As a long-time member of the Society of Professional Journalists, (36 years) I have always felt the need for governing bodies to conduct the public’s business in the open, as much as possible. The Illinois Open Meetings Act does state that certain matters MAY be conducted in closed session. Security is one of those and in view of occurrences in other universities; it is understandable that security is a touchy topic.

I was happy to receive a personal apology from College President, Dr. Walter Packard in response to my letter regarding the February 28 incident. I was also delighted to hear apologies issued publicly by Dr. Packard and Trustee Scott Summers on behalf of the Trustees.

As has been stated, the matter serves as a lesson to other governing bodies regarding how they conduct their meetings.

= = = = =
At the top you can see efforts from inside the board room to keep me from taking pictures of the power point slides that John Maguire was showing the board. You can click on them to see a much bigger image. On the top left is MCC President Walt Packard moving the American flag in front of the window. The head you can see is his. Freedom of Information Officer Pat Kriegermeir can be seen applying opaque plastic to the other window near the American flag. It is the only flash picture I took and, obviously, it did not penetrate the room. You can see other photos in

The photo of the security guards putting up yellow plastic is from that night, as are the two photos of Officer William Schultz telling us we must leave the building. The clock shows the time I walked past it on the way out of the building. The woman taking notes is Iris Bryan. Jane Collins can be seen in the background in the first picture. A head shot of Collins appears next to her comments. Between the two photos of Schultz and Bryan is one of John Maguire, the man making the top secret, hush, hush presentation about radio towers to the MCC Board. The picture would not have been so fuzzy, if I had used a flash. The bottom picture was taken at an early February meeting. It shows Maguire sitting in the center flanked by Mark Saladin and Cindi McDonald. The article from which it was taken is

What Do John Maguire, Mark Saladin and Cindi McDonald
Want To Lease or Sell the McHenry County College Taxpayers?

Articles written about the incident are listed, with links, below:

MCC, the Junior College That Just Keeps on Giving