It’s time to pay the piper, in this case the owners of the Gilger property which the McHenry County College Board voted to purchase during a Crystal Lake City Council meeting on March 4th.

MCC contract attorney Sandy Kerrick announced that the closing would be Monday.

But the interest rate is quite low—3.771%–as McHenry County College Board President George Lowe pointed out at Monday’s Committee of the Whole meeting.

Referring to the low interest rate, college President Walt Packard pointed out after the meeting that bad economic times can sometimes yield some good results. 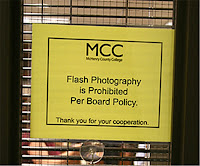 The bonds will be paid off over a twenty year period.

= = = = =
The fuzzy photo of a smiling George Lowe was taken without a flash, as the sign beside the door instructs.

Both photos may be enlarged by clicking on them.