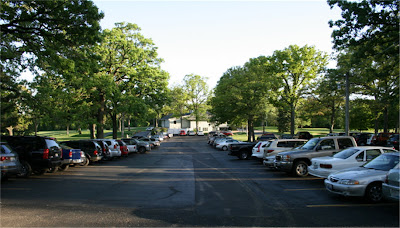 Kate Halma, the woman who coordinates the McHenry County Community Foundation presented what she called “a concept plan” of a multi-purpose event venue.

Maybe I missed something.

I sketched what I saw on the screen, having been asked not to take pictures at the meeting. I have requested a copy from Halma of what all in the room saw on the screen and will be happy to share it with you when she sends it. If she sends it, I won’t inflict my “artwork” on you.

No location has been selected.

The people listed on the steering committee are

Halma said that Narusis had asked “these community leaders to come together and dream big.”

She said that Randy Donnelly and his brother had “talked about antique expositions.”

The Midwest Fiber and Folk Art Fair, held at the Dole Mansion last year, “is ready to leave McHenry County.”

“We consider the minor league baseball stadium and the county fair the two (anchors),” Halma said.

She hopes it will support “various interest groups” and there will be space for hotels, restaurants and other related businesses.

“We welcome your input,” she told the elected officials.

McHenry County Board Chairman Ken Koehler said the effort “started off 7-8 months ago.”

Speaking of the junior college baseball stadium proposal, he said, “It was a good idea. It may not have been a perfect idea.”

An admirer of Walt Disney, Koehler suggested that if he could create Disney World “in Florida swamplands, why can’t we” do something like this?

He emphasized that what had been presented was “a concept plan only.”

“Certainly, there are many places in McHenry County that could support this,” he pointed out, saying that McHenry County Board member Wheeler was a key player.

Pointing to how Heirman had brought CABA (the Continental Amateur Baseball Association) to Crystal Lake, Koehler said, ”We have the opportunity to bring semi-pro people (here), soccer tournaments, a lot of things that go out of our county.

“I hope you get as excited about this as we are.”

“This is not going to be done
with taxpayer dollars.”

“Two years from now we can be going to a grand opening.

“Anybody that has any ideas about land (get in touch).”

Probably tomorrow: Some cautionary thoughts for the Foundation.

= = = = =
The top head shot is of baseball promoter Pete Heitman, who, I’m told, most recently made a failing bid to be the Frontier League minor league baseball team ownership group selected by Heartland Community College in the Bloomington-Normal area. Bill Veeck’s son Mike’s group was selected instead. McHenry County Board Chairman Ken Koehler is seen in the lower photograph.