Warning: Parameter 2 to wp_hide_post_Public::query_posts_join() expected to be a reference, value given in /srv/users/serverpilot/apps/wordpress/public/wp-includes/class-wp-hook.php on line 292
 Roiling Up the Troops? - McHenry County Blog ↓
McHenry County Blog Home

Remember the big to do about changing the junior high school schedule in Crystal Lake?

I don’t usually go to District 47 board meetings but that mid-December night I was in the audience at West School and wrote a story on the 5-2 decision. 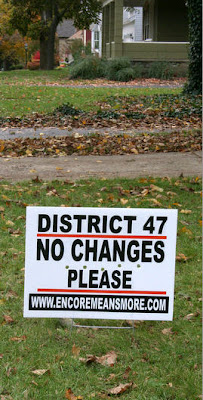 The teachers had put on a full-court press to defeat the proposal, including yard signs.

After the decision, the teachers made good on their threat to get involved in the board elections and retaliated with a campaign to gain more teacher friendly board members at the spring election and picked up a vote.

Not as an organization, their leaders said, but the yard signs for the teacher-favored candidates were often at the same places the previous “NO CHANGES” signs were.

There was a board meeting recently where teacher satisfaction surveys were apparently reviewed. The teachers used the survey to express their continuing displeasure at the December, 2006, curriculum decision.

“Did anyone else hear about what went down at the last CL school board meeting? It blows my mind that Green’s comments made it into both NW & Daily Herald, but this one seemed to get missed.

I received a call from a friend who teaches in CL and attended the board meeting. He/She said that one of the school board members stated that teachers are nothing more than glorified baby sitters and they should be kissing the feet of those who hire them! Apparently there was more, but that was the highlight. Yikes!!

“I know we have some CL teachers on the forum. Did anyone else hear about this?“

I asked District 47 Superintendent Ron Miller about the story and here’s his reply:

”While my memory isn’t what it use to be at my advancing age I am pretty positive that no board member made that direct statement. We were presenting the results of the student and teacher surveys that we did surrounding the new middle school day change we made this year. Upon reading some of the critical comments that were made by teachers I do believe that a comment was made that the decision to change the day and add more minutes to math and science has been made and that teachers that didn’t like the decision ‘needed to get over it.’ A reference may also have been made that some teachers care about themselves more than their students as it related to the negative comments that were written about the change.

“I’m pretty sure I would have remembered if a board member said that our teachers are nothing but baby sitters and should be kissing our feet for being hired. Every one of our board members respects the passion and commitment that our teachers have towards providing educational excellence for all students – as do I. Most of our teachers will tell you that I firmly believe that this district is as good as we are because of our teaching professionals.”

Others who attended the board meeting agreed that what “hippiechick” reported was incorrect.