The Chicago Tribune ran an article on Thursday about Waukegan’s city council having “authorized staff to explore” a “proposal to build a minor-league baseball stadium downtown.” 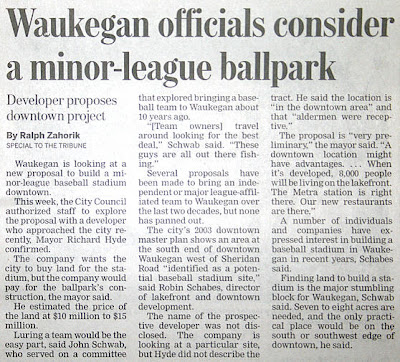 At first I thought it might be Libertyville’s Pete Heitman search east, as well as west in McHenry County.

I was told that Heitman was one of the losing baseball promoters for the Heartland Community College supplied site in Normal, Illinois, so he obviously is not wedded to McHenry County.

But, the article by Ralph Zahorik says,

“…the company would pay for the ballpark’s construction, the mayor said.”

He told the Northwest Herald:

“The team would seek some financial help from its home community and county,”

And in a direct quote,

“… we’ve just got to find somebody who’s going to help out. We need a little bit of help, obviously, because we can’t do it all ourselves.”

Heitman wanted McHenry County College taxpayers to take all the risk on his MCC proposal.

But, McHenry County Board Chairman Ken Koehler promised no tax dollars would be spent on a baseball stadium or convention center at the McHenry County Council of Governments meeting.

Ballball Digest ran an article on Waukegan, too.

I found this sentence of interest:

“We know groups regularly pop up to bring baseball to the greater Chicago area, but let’s be honest: none of the Chicago-area minor-league teams, either independent or affiliated, are setting the world on fine; Kane County does well, but the Northern League and Frontier League teams in the area only do OK and have faced some serious issues in recent years.“ 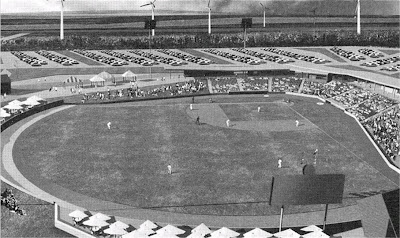 I still think the people wanting a baseball stadium should seek competitive proposals.

I offered some other advice in this article, which I hope will be read by anyone trying to build a baseball stadium in McHenry County:

Part 3 of “If I Supported a Baseball Stadium…”

And, such folks should not forget that private money has already stepped forward to build a baseball stadium in Harvard. (You can see what it would like like above.) One of the promoters even graduated from Crystal Lake Central High School.