Inspired by presidential candidate Barack Obama (and, you are right, such inspiration does not come from his direction very often), I have decided local politicians might like the opportunity to knock down those nasty political rumors that pop up every election.

When I ran for McHenry County Treasurer in 1966, my opponents put out the word that I was a homosexual.

Here was the way the rumor went:

How come Cal’s not in Vietnam?

There are only two reasons why guys his age don’t get drafted.

The other is moral.

He doesn’t have a girl friend.

Nothing one could do about the rumor.

No way to combat it.

The truth was that I had tried to enlist in the Reserves when I was between Oberlin College and grad school. The only openings were for the Marine Reserves. (OK, try picturing me as a Marine. I know it’s tough, but everyone needs five good laughs a day and here’ an opportunity for one of them.) 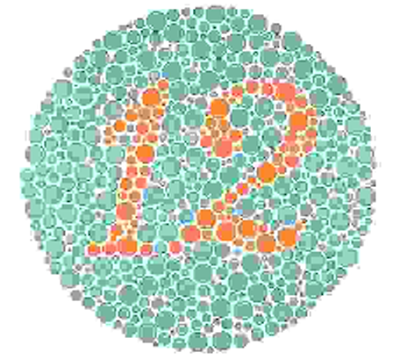 It was off to Great Lakes for a physical exam.

There was a young doctor who examined me.

He gave me a color blindness test.

I wasn’t giving the right answers.

When he got to the final page, he said,

“You better get this one right!”

It was the control (see illustration) and I gave the correct answer.

“Well, that doesn’t matter. The Marines need people who can see through camouflage.”

When I jumped off the table I was sitting on, he looked at my feet.

“Do you have flat feet?” he inquired.

“No, but I have a tendency toward flat feet,” I replied.

He then told me that I could not get into the Marine Reserves, if I had a tendency toward flat feet, but wanted to have another doctor at some base down the road to take a look at my feet, too.

So, it was off to the other facility.

I sat a long time.

Finally, the other doc and a recruiter came over. The doc, also young and I imagined not wanting to be in the Armed Forces any more than the first one, looked at my feet.

He and the recruited walked away.

The recruiter came back and and told me because of my tendency toward flat feet I could not volunteer for the Marine Reserves, but could join the Marines.

I gave him a “thanks, but no thanks,” reply.

Then he told me that I was going to be designate “1-Y.”

I asked what it meant.

He told me that I would be deferred from the draft unless the president declared a national emergency.

If I get time, I’ll address a current rumor tomorrow. (If not, a bit later.) Join me in the first mud puddle of the general election. And, if you have heard scandalous rumors about a candidate, email them to me at McHenry County Blog. If you are a candidate who would like to knock down a rumor, I’ll let you do it in your own words.