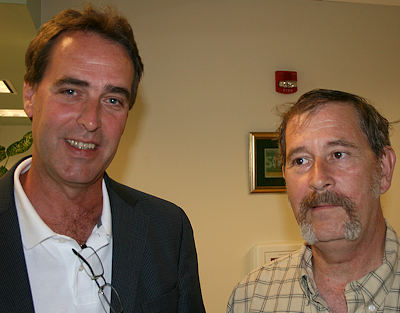 When I got to the hearing on State Rep. Mary Flowers bill to impose a single payer medical delivery system for Illinois and to increase individual income tax rates 67%, State Rep. Mike Tryon and his Democratic Party challenger Bob Kaempfe were talking in the hall.

I wasn’t close enough to hear was they were discussing.

Maybe it was debates or joint appearances.

I asked them to pose together and this was the best shot I got.

Later in the hearing, Kaempfe took Tryon to task for opposing Flowers’ bill, just as he said he would in his press release.