The first contribution was made September 30, 2007.

Another thousand was given December 31, 2007. Sounds like a last minute before the filing deadline contribution, but I don’t know Federal campaign reporting deadlines.

For those of you who don’t remember when the Illinois primary elections were held, that’s the day. 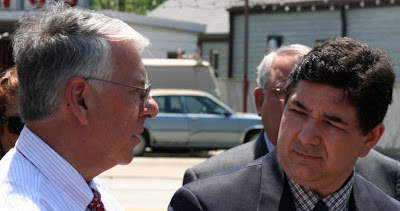 So, Congressman Don Manzullo knew that Borling was strongly supporting his Democratic Party opponent well before the “official” endorsement press release was sent out.

Each candidate checks who makes contributions to the opponent.

= = = = =
The picture on the top is of John McCain National Convention Delegate John Borling. On the left in the picture at the bottom is Congressman Don Manzullo talking to his challenger Robert Abboud.