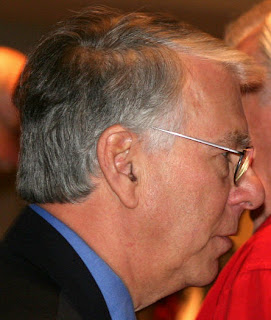 Even with gasoline prices falling, congressmen are still seeking ways to present themselves as doing something about the problem.

[WASHINGTON] Congressman Don Manzullo (R-Egan) today joined 83 of his colleagues in introducing a comprehensive energy bill that takes an “all of the above” strategy to end our dependence on costly foreign oil and reduce gas prices in America. At a Capitol Hill news conference this afternoon, the Members of Congress will also demand Democrat House Speaker Nancy Pelosi end her opposition to American-made energy and allow a vote on the bill.

The American Energy Act (HR 6566), which Manzullo co-sponsored, will increase the supply of American-made energy, improve conservation and efficiency, and promote new and expanding energy technologies to help lower the price at the pump and reduce America’s increasingly costly and dangerous dependence on foreign sources of energy. Many of the provisions of the all-encompassing bill were included in Manzullo’s 12-point plan to reduce gas prices in America, l which he unveiled in May.

“The ultimate plan is for alternative energy – such as electricity, hydrogen or something not yet invented – to power our vehicles in the future, and this legislation calls for comprehensive efforts to spur research and development on a host of alternative and renewable fuels. But mass production of those new technologies could be many, many years away,” Manzullo said. “In the meantime, we must take additional steps to increase the supply of oil and gas in this country so we no longer have to rely on foreign countries that often don’t ha ve our best interests at heart.

“More than 112 billion barrels of oil exist within our borders and along our shores – enough to power 60 million cars for 60 years – and Americans should be allowed to extract the oil as part of our plan to reduce surging gas prices in America. House Speaker Nancy Pelosi must end her opposition to American-made energy and allow votes on legislation to increase domestic production of oil and gas. Americans simply can’t afford to keep paying these surging gasoline costs at the pumps.”

Bipartisan passage of the American Energy Act would demonstrate to the world that America will no longer keep its rich energy resources under lock-and-key. Not only will it help bring down the price of gasoline now, but it will make needed investments in the alternative fuels that will power our lives and our economy in the future. Following is a brief summary of the American Energy Act:

• To increase the supply American-made energy in environmentally sound ways, the legislation will:

• To improve energy conservation and efficiency, the legislation will:

• To promote renewable and alternative energy technologies , the legislation will:

1. Spur the development of alternative fuels through government contracting by repealing the “Section 526” prohibition on government purchasing of alternative energy and promoting coal-to-liquids technology;
2. Establish a renewable energy trust fund using revenues generated by exploration in the deep ocean and on the Arctic coastal plain;
3. Permanently extend the tax credit for alternative energy production, including wind, solar and hydrogen; and
4. Eliminate barriers to the expansion of emission-free nuclear power production.