This is the sixth installment of what was contained in the United States Department of Justice Civil Rights Division report about Cook County Jail. It addresses suicide and fire prevention.

There is a section entitled, “Inadequate Suicide Prevention” (page 66).

Four-point leather restraints are the way those who talk about suicide are treated (page 66).

“This is grossly inappropriate,” the report says.

“Correction officers have no access to cut-down tools for quick response in the event of a suicide attempt by hanging.”

On January 1, 2008, a correctional officer tried to hold the victim up to remove the sheet from his neck, but wasn’t strong enough. After six minutes paramedics cut the inmate down with “a key” (page 67). 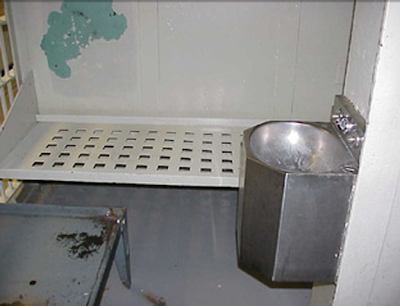 The jail even took a hit on fire safety (page 70).

“No smoke detectors in most inmate housing areas…Keys are not marked for rapid identification in an emergency… poorly prepared for an emergency… 1.8 fires per week… setting fires beneath their beds in order to utilize the metal bunk as a hotplate to heat food… [or] get correctional officers’ attention… monthly fire ‘safety inspections’ cursory.”