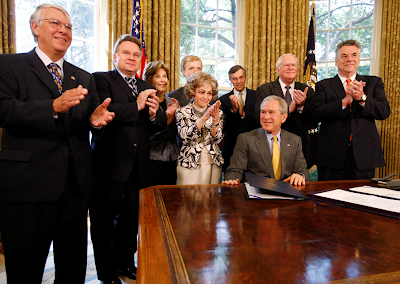 [WASHINGTON] Congressman Don Manzullo joined President George W. Bush and several colleagues today at the White House for a ceremony to sign into law a bill that extends and expands sanctions against Burma’s repressive military regime.

Manzullo, senior Republican on the House Foreign Affairs Subcommittee on Asia, the Pacific and the Global Environment, is a long time champion of freedom and human rights in Burma.

In May 2008, the President signed into law another bill, coauthored by Manzullo, to award Burma’s Aung San Suu Kyi with the Congressional Gold Medal. Aung San Suu Kyi, a Nobel Peace Prize winner and the daughter of Burma’s revolutionary hero, has been under house arrest for years as a threat to Burma’s ruling military regime.

“The military junta’s unyielding grip on power in Burma is a disgrace. This obsession was on full display most recently when the junta refused repeated offers of assistance in the wake of Cyclone Nargis’ terrible destruction,” Manzullo said. “The bills signed into law today will put the necessary pressure on junta leaders and close the loopholes that keep them in power.”

Manzullo is also a member of the Congressional-Executive Commission on China that monitors human rights and rule of law violations in China.