In the past, most controversy about the Crystal Lake Gala has revolved around decisions of who should be allowed to do what in its 4th of July Parade. 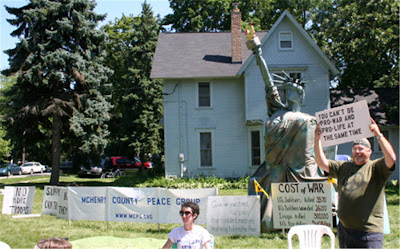 The most well publicized was the rejection of the McHenry County Peace Group’s entry last year.

They wanted to have signs telling how many of our Armed Forces have been killed in Iraq.

Rejected, they got more publicity for their cause than they would have had they been in the parade by putting a Statue of Liberty in a big side lot on Dole Avenue. 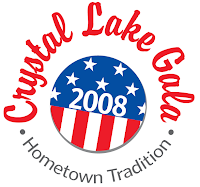 McHenry County Democratic Central Committee Chairman Tom Cynor pulled his party’s entry out of the parade because of the censorship. (Notice that he recreated a similar parade controversy with resulting publicity all by himself when the Founders Day Parade Committee decided to reassert its tradition of only allowing incumbent elected officials in its parade. No candidates not in office need apply). 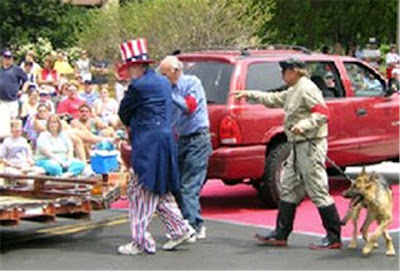 In a prior year, the Libertarian Party got in trouble for its “storm trooper” and German shepherd putting “unsuspecting” Libertarians spotted along the parade route in a little rolling jail. That was a protest against the Homeland Security Department.

I got a big chuckle out of same jail being used to confine a man identified as George Ryan in 2000, I think. That was before Ryan was convicted. 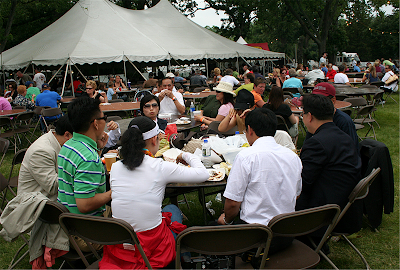 Besides parade entry censorship, the Gala started charging $5 to get inside the fence surrounding the food concessionaires and entertainment. That created a firestorm on the Northwest Herald comment board under a complaining letter to the editor from Dan McMullen.

Then, there were the neighbors complaints about generators running all night, the tear down of the carnival during sleeping hours etc. That led to the celebration being moved from the Dole Mansion to Lippold Park.. 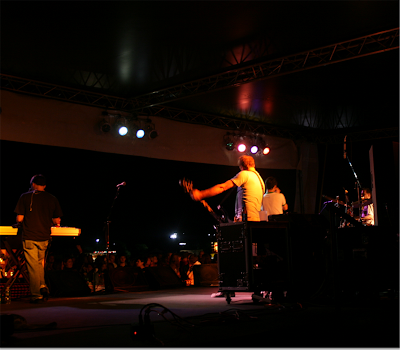 This year the problems seem to be monetary and, maybe, more.

The first night there was a problem with the price being charged for carnival rides. The Northwest Herald ad had cut rates not only for the afternoon of July 3rd, but for the night, as well.

There was some controversy about $6 being charged for a cup of Miller beer. $4 a cup apparently was supposed to be the price.

The cost of the bands may have outstripped entrance fees. You see Sixteen Candles playing above. I was ready to dance to their music. 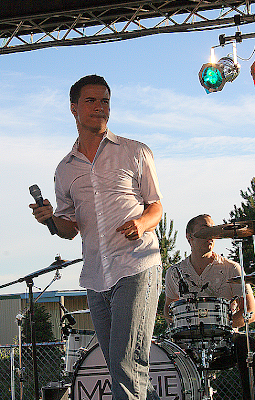 Maggie Speaks, seen to the right, preceded them.

Voluntary groups have traditionally provided manpower for various tasks. In the past, they have gotten paid for whatever function they agreed to staff.

This year, checks have yet to be written.

Other problems were the lack of parking for the fireworks. It was in such short supply that I’m told Route 176 had to be shut down for three hours.

Maybe that will lead to the fireworks being set off over Crystal Lake again next year.

There was some controversy when some young people wearing Gala tee shirts were caught drinking. Apparently, that was a “no-no.”

With potential financial problems, I’m wondering it there is enough money to pull off next year’s fireworks.

I remember when the Crystal Lake Jaycees used to put on the fireworks using the natural amphitheater at Veterans Acres. Jaycees would pass shopping bags to collect money to pay for them. 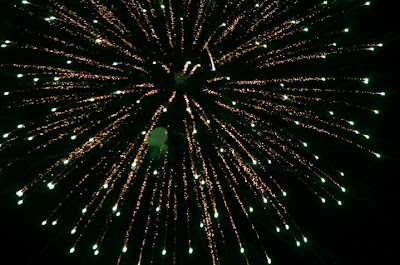 Then, one year, a teen found an unexploded rocket and blew his hand off.

The result was that the Jaycees couldn’t get insurance for future Independence Day celebrations and the fireworks ended for a while.

If the Gala Committee is in trouble, I hope those who have given of their time can regroup in time to be operational next year.

= = = = =
The people seen eating at last year’s Crystal Lake Gala are young political leaders from China whom I hosted for the day.