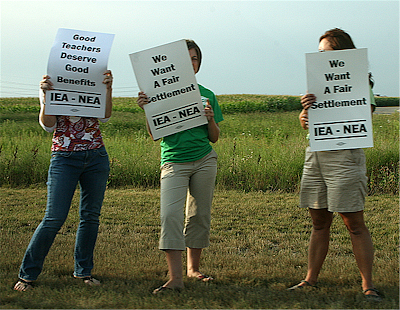 Green seemed to be saying if the Huntley teachers’ union wanted to give up some benefit in the offer made by the board, the board would be willing to exchange that with another benefit.

Former school superintendent and chief negotiator of teacher contracts in the Joliet area and now local taxpayer Don Bonds said he was satisfied with that message.

“I want the board to hold the line,” he concluded, adding, “I think you were overly generous.”

Before Bond spoke, teachers John and Laura Brummer took the podium during the public comment period.

I was taking their photo, so didn’t get their words, but it was to the effect that they liked teaching in the district and looked forward to continuing to do so.

Both wore tee shirts that said,

Seemingly trying to intimidate the board, he used the union scare word “scab” several times and said, “You’re treading on thin ice…I hope you have a professional negotiator. If not, you’re (in deep water).”

As the teachers who had left the road leading to the District 158 administrative building to attend the meeting were leaving the room, I heard several saying they would be on Route 47 tomorrow.

Today, Friday, was supposed to be the first day of school. 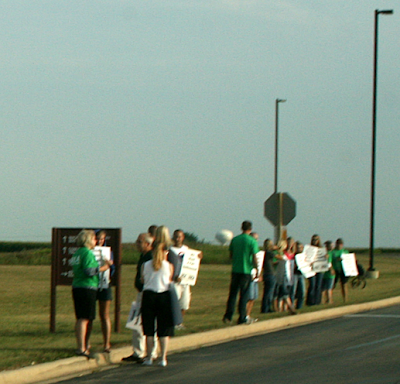 The three young women were among others standing along the road to the district’s administration building Thursday night before the board meeting.

Here is what the Huntley teachers now say they want.

You can see my quick skim of what it contains here. Both stories were posted yesterday afternoon.