After watching one the Crystal Lake County Club foxes from twenty feet away, the night grew a bit too cool, so we moved into the bar. It felt much too much like fall.

There the closing ceremony of the Olympics was in full swing.

Although the Olympic flag waving by guys who probably were in charge was less than impressive, the London bus that acted like a Transformer did catch our attention. Unfortunately, I didn’t think to take some pictures until it had left the screen. 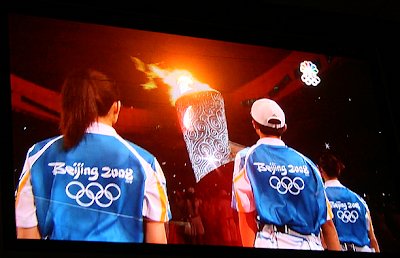 We saw contestants getting a last look at the flame.

The human column was impressive.

I want to see the Democratic precinct captains do that. 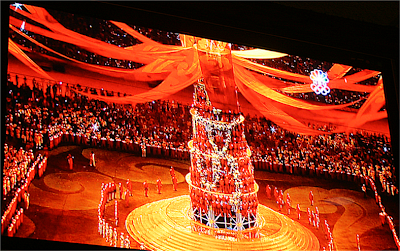 We wondered what Mayor Richard Daley was saying.

And, that was before the guys swinging on wires above the stadium.

After I got home, I read a wonderful column Elgin’s Daily Courier Managing Editor Mike Bailey. He wrote about what having the Olympics in Chicago would be like. It sounded like Mike Royko. No wonder he just won a column writing contest put on by the Association Press.

Here’s a couple of paragraphs, but I assure you the whole column is worth reading, including the part about dwarf tossing and other new events:

“All sprints will take place at midnight on the West Side. Runners will have to listen carefully to distinguish the starter’s pistol from ambient gunshots. The winner gets to live.”

“Women’s soccer will be replaced by roller derby. Joanie “The Blond Amazon” Weston will come out of retirement to lead the U.S. Team.

“And finally, the games will be moved back to October so that Wrigley Field, which is always idle that time of the year, can be used for field hockey and team handball, whatever that is.“

= = = = =
And a sad note for those of us who like newspapers. I noticed that the Elgin paper has lost whatever it called its Sunday lifestyle section. The paper is getting smaller and smaller. I shall miss Dave Gathman’s columns.