Warning: Parameter 2 to wp_hide_post_Public::query_posts_join() expected to be a reference, value given in /srv/users/serverpilot/apps/wordpress/public/wp-includes/class-wp-hook.php on line 292
 Obama Ticket – Doubling Up on Rezko - McHenry County Blog ↓
McHenry County Blog Home 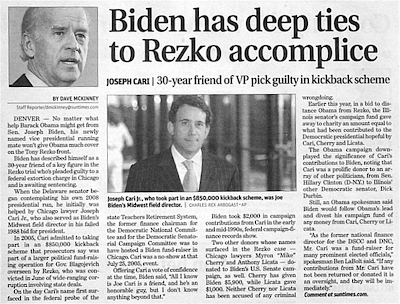 Know what jumped to his mind when he heard that our Illinois U.S. Senator Barack Obama selected fellow Senator Joe Biden (D-Delaware)?

The guy who fingered Governor Rod Blagojevich as “Official A.”

“On the day Cari’s name first surfaced in the federal probe of the state Teachers Retirement System, the former finance chairman of the Democratic National Committee and for the Democratic Senatorial Campaign Committee was to have hosted a Biden fund-raiser in Chicago. Cari was a no-show to the July 25, 2005, event.”

It’s not bad enough that Chicago Democratic Party crook Tony Rezko was one of Barack Obama’s biggest fund raiser when he first ran for state senator.

Now there’s a connection to the Democrats’ vice presidential candidate.

Well, they could follow the example of Democratic Party gubernatorial primary candidate State Treasurer Phil Angelides. (This is one link you should read. The TV ad template already exits.)

And irony of ironies, under McKenney’s article is a column by a good buddy of Cari, Carol Marin. She still hasn’t apologized for having sung his praises two days before Cari was indicted for Rezko-related corruption.

Have you figured out that neither of the Democratic Party candidates have ANY managerial experience other than their office staffs? (Yes, I’ll admit that GOP candidate John McCain has that same shortcoming.)