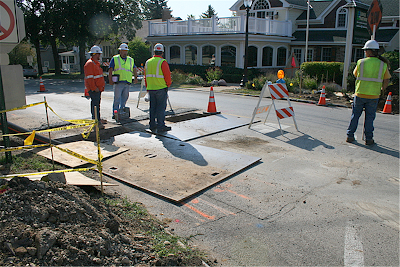 My nose for news was OK last night on my way home from the American Community Bank NFIB meeting between Congressman Don Manzullo and small business folks, but I didn’t stop to take a picture.

At the stop sign at the top of the hill on East Crystal Lake Avenue, a small van had its lights blinking.

There was a policeman who walked around to the drivers’ side.

As I was driving around the vehicle, a woman got out of it.

There was street work being done. The City of Crystal Lake is spending oodles of Tax Increment Financing property tax money taken from our schools, park district, county, county college, etc., to bury the electric and other lines along East Crystal Lake Avenue. 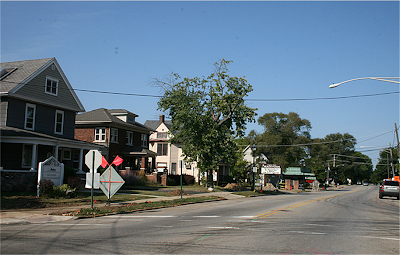 (For those who do not understand the TIF process, local tax districts like schools just raise their tax rates enough to make up for the revenue lost in TIF districts. If you are in a tax district in which the TIF lies—like McHenry County–your real estate taxes go up to make up for the revenue lost to the TIF district, which the city officials spend to subsidize developers in the TIF or make marginal improvements like burying utility lines.)

The money was just burning a hole in the city council member’s pockets.

For some reason the song, “Girls Just Gotta Have Fun,” comes to mind, but it’s the theme of the song, not the gender in the title that brings it to my frontal lobes. Three of the four “Yes” votes came from men, Mayor Aaron Shepley, who lives in the neighborhood, included.

But, back to the story.

It was pretty obvious the woman drover had some serious problem.

Today I went Downtown for a haircut after dropping my son off for his first half day of school and decided to walk down and see what I could find. 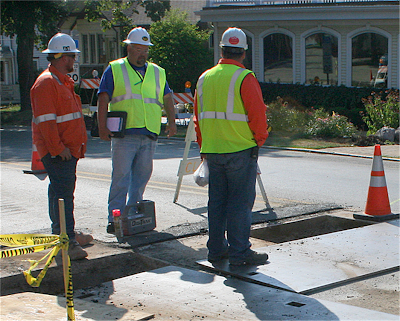 As you can see from the picture, there was a hole, which, almost certainly, was covered with a steel plate.

I talked to the supervisor, who told me he had never seen anything like it.

He speculated that someone had come up to the stop sign and put on the brakes, skidding on the steel plate and pulling it away from the hole.

Now that I think about it, it could just have easily been my old Cadillac whose wheel plunged into the uncovered hole as dusk was turning into night.

The top and bottom picture is of the hole being contemplated by city contractors yesterday morning.

You can see the old flower shop in the background from which we ran my 1996 primary campaign for state representative after McHenry County Republican County Chairman Al Jourdan put Cary county board member John Brehmer up to challenge me.

The middle photo shows East Crystal Lake Avenue between Williams Street and Walkup Avenue after utility wires have been buried. Beautiful isn’t it? But the power lines in the foreground detract from the view. Maybe they will be next to be buried.

My last legislative office in 1980-81, in a room not being used by my father’s Barley and Malt Institute, is the corner building at the intersection of South Williams and E. Crystal Lake Avenue…for you trivia buffs.