When I was sitting at the Huntley School Board meeting the Thursday before last, the board went into secret session twice. 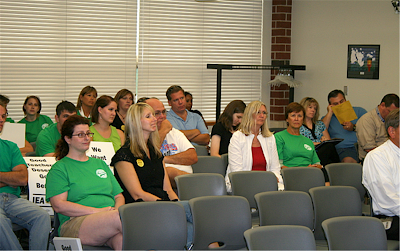 Teachers were sitting in the audience with visible picket signs.

Of course, I don’t know what was discussed, but, odds are that the teacher negotiations were among the topics.

At McHenry County Board meetings, President George Lowe has been insistent that Centegra employee Frances Glosson leave the room for the entire period when payment of vouchers are considered.

He won’t allow the agenda item to be considered until she is in the hall.

Mike Skala, whose wife is a teacher at Huntley High School, left with the rest of the board both times its members left the board room.

I know he has recused himself from voting on the contract.

That is certainly appropriate.

I don’t know if the board discussed the teachers’ contract negotiations when its members left the room that Thursday.

But, it sure seems likely.

That night I didn’t know if Skala was in the same room with his fellow board members when and if the board discussed the contract.

But, Friday, I asked Superintendent John Burkey and was told that Skala did attend the first part of one of the meetings. Skala made a comment and then left the room where the board was meeting.

Although Skala was not in the room when contract discussions were being held, no one in Thursday’s audience could have figured it out.

Burkey said that Skala could have participated in the teacher salary negotiations this year, as he did last time around, but decided not to.

If Skala wants people who don’t read McHenry County Blog to think otherwise, it would seem to me he should stay in the board room when his colleagues leave to discuss contract negotiations.

= = = = =
The top photo shows some of the audience at the August 21, 2008, Huntley School Board meeting. The bottom one shows School Board President Shawn Green and school board member Mike Skala returning from the secret meeting before the open meeting began that Thursday night.