When I ran for office in 1966 and in 1968, cartops were all the rage. The big ones cost something between $10 and $20. My 1966 Democratic Party opponent for McHenry County Treasurer Doris Fortier had a big homemade one that was lighted at night. I was envious. 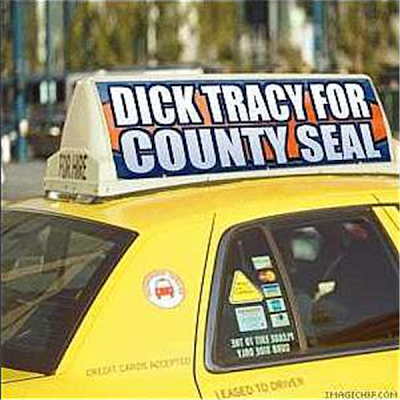 The strategy was to find people who worked in retail stores and get them to part their car with your catrtop near Route 14 or another road with lots of traffic.

Or get someone to commute on the tollway with one.

Now they cost too much, but still are a great way to build name ID for those with tons of money and the organizational skill to deploy them.

Heck of a Guy blogger Allen Showalter has found a web site that allows the creation of cartop images at Image Chief.

Of course, cartops do not have to be limited to taxi cabs.

So, let the campaign for Dick Tracy for County Seal continue.