Look at these statistics that Huntley School District 158 web site (click to enlarge): 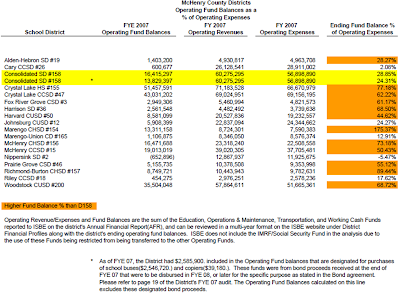 So, the Huntley school district had about 25% of their annual budget in the bank at the end of its fiscal year. (The higher figure includes earmarked school bus purchase money.)

The Johnsburg Unit School District was about the same as Huntley’s unit district.

Some other schools are much worse off.

Nippersink up the Richmond-Spring Grove area had a negative balance of 5%.

Marengo’s Grade School district was at 13%.

Some districts have balances that are obscene.

How do they get away with that?

The following school districts had reserves above 60% of what they spend:

At 50% was McHenry Grade School District 15.

Noting that high schools tend to have the highest fund balances, I would observe that the State Aid to Education formula was written by high school teacher and State Representative Gene Hoffman.