The first (and only) time I saw Cardinal George was shortly after his appointment at a Pro-Life rally in Rosemont. It was clear that the subject was one pretty high on his priority list.

I don’t know if he used the words “intrinsic evil” to describe abortion that day, but he does in the letter below.

Now, just in time for the 2008 election season, he has released the following letter, which was forwarded to me by Spring Grove’s Sue Serdar. Serdar is chairman of the Pro-Life Victory Committee, a political action committee.

“One cannot favor the legal status quo on abortion and also be working for the common good,” Cardinal George writes.

Before you think the letter was written to be released right after John McCain’s nomination, look at when it is dated.

That’s between the nomination of Barack Obama and John McCain, so think what you will of its timing.

George points out that the Church does not endorse candidates.

I have added more paragraphing to the letter below to make it easier to read on a computer screen. 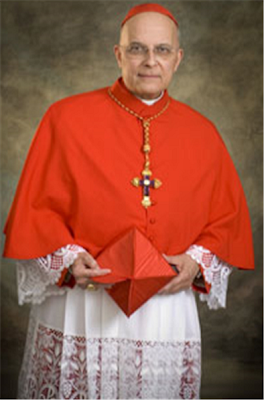 Archdiocese of Chicago
Office of the Cardinal
September 2, 2008

Dear Brothers and Sisters in Christ,

In the midst of a lengthy political campaign, matters of public policy that are also moral issues sometimes are misrepresented or are presented in a partial or manipulative fashion.

While everyone could be expected to know the Church’s position on the immorality of abortion and the role of law in protecting unborn children, it seems some profess not to know it and others, even in the Church, dispute it.

Since this teaching has recently been falsely presented, the following clarification may be helpful.

The Catholic Church, from its first days, condemned the aborting of unborn children as gravely sinful.

Not only Scripture’s teaching about God’s protection of life in the womb (consider the prophets and the psalms and the Gospel stories about John the Baptist and Jesus himself in Mary’s womb), but also the first century catechism (the Didache or Teaching of the Twelve Apostles) said:

The teaching of the Church was clear in a Roman Empire that permitted abortion.

This same teaching has been constantly reiterated in every place and time up to Vatican II, which condemned abortion as a “heinous crime.”

This is true today and will be so tomorrow.

Any other comments, by politicians, professors, pundits or the occasional priest, are erroneous and cannot be proposed in good faith.

This teaching has consequences for those charged with caring for the common good, those who hold public office. 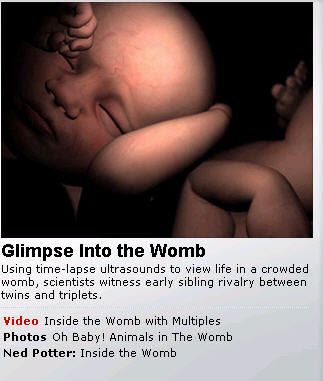 The unborn child, who is alive and is a member of the human family, cannot defend himself or herself.

Laws that place unborn children outside the protection of law destroy both the children killed and the common good, which is the controlling principle of Catholic social teaching.

One cannot favor the legal status quo on abortion and also be working for the common good.

This explains why the abortion issue will not disappear and why it is central to the Church’s teaching on a just social order.

The Church does not endorse candidates for office, but she does teach the principles according to which Catholics should form their social consciences.

The teaching, which covers intrinsic evils such as abortion and many other issues that are matters of prudential judgment, could not be clearer; the practice often falls short because we are all sinners.

There is no room for self-righteousness in Catholic moral teaching.

The Conference of Bishops in this country and the Bishops of Illinois have issued statements about Catholic social teaching and political life. They are available in our parishes.

All of us should keep our country and all the candidates for office in the next election in our prayers.

God bless you and your families.

Sincerely yours in Christ, 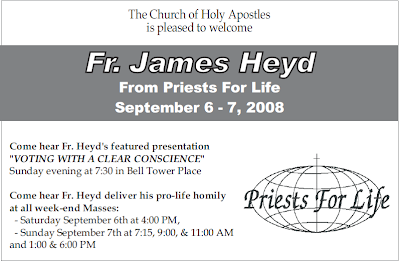 I don’t know if it is more than coincidence, but Father James F. Heyd is delivering the homilies this weekend at McHenry’s Holy Apostles Church at the corner of the Crystal Lake-McHenry Blacktop and Bull Valley Road. In 2005, Cardinal George gave Father Heyd permission to work full time with Priests for Life. His talk is entitled, “Voting with a Clear Conscience.”

= = = = =
So far, no Chicago secular media have run a story on Cardinal George’s statement.

The top image is of an ad used in South Dakota two years ago. The second is of one of Cardinal George. Next you see one of our great-nephews before birth. The clearest in utero picture is from an ABC story on triplets. The announcement of Father James Heyd’s appearance in McHenry and all of the photos can be enlarged or played by clicking on them.