Only one police officer in the whole world gets this recognition. 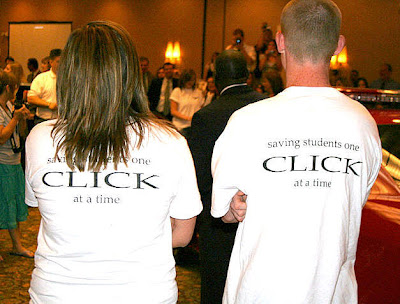 What the judges looked for is someone who has developed a “unique law enforcement/ community traffic safety program.”

McGrath has done that through the development of Operation Click.

“Operation Click strives to encourage high school students to make a personal decision to wear their safety belts. This is accomplished through positive reinforcement, and prize giveaways. Operation Click has successfully raised the seat belt compliance rate among students from 65% to 95%, reducing the number of severe injuries during motor vehicle crashes and saving lives.” 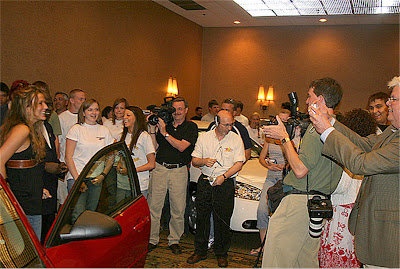 McGrath has certainly done that.

I missed this year’s awards ceremony, but reported on it in 2007.

The program he supplies the heart and brain for has increased high school student seat belt use by offering incentives, including a new car from Crystal Lake Pontiac-GMC Truck, owned by Sam Oginni.

Here is the story I wrote about the 2007 award ceremony:

And the Last Shall Be First

Here are the other stories that have appeared on McHenry County Blog: This is a program that could started in any community. A new car is not needed. A used one would do, I think. 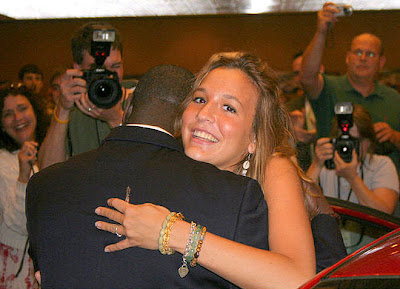 The chart at the top is a bit out of date, but still shows what the program accomplished in Crystal Lake’s District 155 High Schools.

Below the two teens with Operation Click tee shirts is Kate McNamee, winner of the 2007 new Pontiac from Sam Oginni, owner of Crystal Lake Pontiac.

Next McGrath tends to one of the details before the 2007 luncheon. You can see the wrecked car in which Oginni’s daughter was not killed.

At the bottom Kate McNamee hugs Same Oginni after winning his car in May of 2007.