Pat Kennedy has been attending meetings of the McHenry County Regional Planning Commission. What she has observed and her conclusions about it follow:

I have been attending most of the McHenry County Regional Planning Commission meetings over the last several months.

The most recent draft chapter, titled,

There are several areas that should cause great concern for most of the citizens of this County. 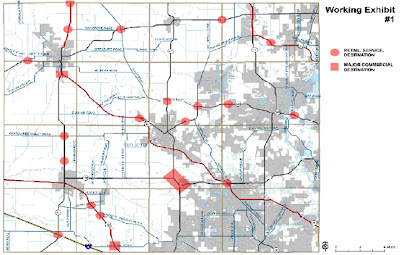 One of these is the plan to encourage “Retail, Service Destinations” at 18 cross-roads in the rural areas of our County. The draft states,

“Four-corner businesses can provide needed provisions for motorists traveling in the unincorporated areas of the county . . .”

The short-sightedness of this proposal is staggering.

Encouraging these cross-roads businesses would immediately create increased congestion, decreased traffic flow and destruction of the rural atmosphere that the public so clearly stated they wished to preserve.

In addition, they would create what in planning circles is called “an entering wedge” which simply means that they would encourage every expanding development around each of those cross-roads.

The full copy of this draft chapter can be found at this web address.

= = = = =
Click on the map to see all the places McHenry County zoners want retail development. Should people be curious about who owns property at these intersections?

One final thought: putting retail establishments at dark crossroads all over McHenry County will create one other problem: light pollution.

I am certain that lots of people move to the rural parts of McHenry County to escape the light pollution emanating from shopping areas like Crystal Lake, Algonquin and McHenry. A lot of people would be willing to trade nighttime darkness for a slightly longer drive for a gallon of milk.