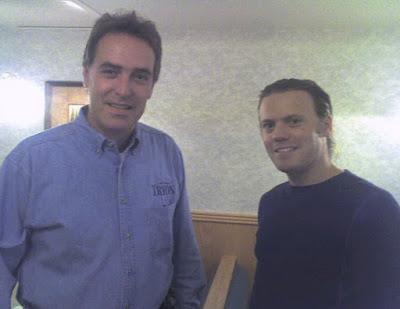 I was in Andy’s Family Restaurant last Saturday morning and who should walk in but State Rep. Mike Tryon (R-Crystal Lake).

Tryon, whom I discovered was there in his role as McHenry County Republican Central Committee Chairman, was having breakfast with Crystal Lake’s Bryan Javor, its newly-elected president.

He’s about the same age as I was when I took over the reins when Jack Schaffer was off the Germany to serve in the Armed Forces.

For once, I didn’t have my camera, but Javor handed me his cell phone as if I would know how to use it.

He showed me what button to push and you seen the result.

Later he sent me this press release:

Elections were held at the McHenry County Campaign Headquarters. Candidates elected were Bryan Javor as Chairman, Erica Poremba as Vice Chairman, Greg Austin as Treasurer and Garret Hill as Secretary.

Later he emailed me this executive meeting notice:

Sunday September 21st the second executive board meeting will occur.

The MCYR Chairman, Vice Chairman, Treasurer and Secretary will be in attendance.

The meeting will determine who is appointed as committee Chairmen.

Positions will be determined in part based on responses received from the MCYR Chairman’s survey and emailed request for additional member involvement.

The Executive board members will also choose a day for the next member meeting.

This will again be based largely on responses to the attached survey. The survey was sent September 14th using internet polling technology thru Poll Daddy.