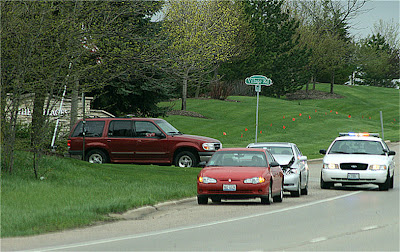 It was about how I had attended a Crystal Lake City Council meeting the night the Villages was approved in the late 1989’s to testify about how the developer impact fees could not possibly pay for the District 47 elementary school classrooms that would be needed.

After I looked at the map and saw Village Road coming out onto Randall Road just north of Miller Road, I decided to criticize that, too. 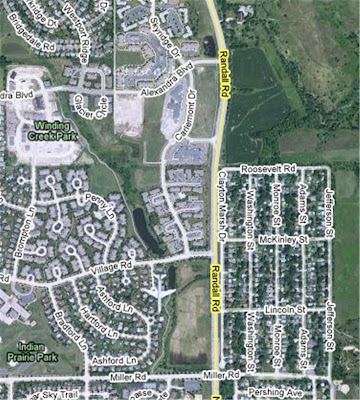 You see, my mother was killed at a similar intersection in Woodstock in 1987. She was coming across Route 14 at Dean Street and a semi barreled down from Harvard at over 60 miles per hour and hit her car. (They tested her for drugs and alcohol, but not the trucker. Go figure.}

The two intersections are so similar.

Now, twenty years or so later, the McHenry County Highway Department has reached the same conclusion I did.

They are asking that both Village Road and Alexander Boulevard be made right in, right out only.

No left turns across Randall Road.

It makes as much sense now as it did 20 years ago.

Dan McCabe, editor of the Northwest Herald, wrote a column about the situation Saturday.

You can find more information here and comment to the County Highway Department here.

There’s a meeting Tuesday afternoon between 4 and 6 at South High School.