Julie Lehmann is now its chairwoman and Karen Kruckenberg is treasurer.

How much money does the committee, formed in 2004 have?

One thing is for sure.

This is no grass roots movement…at least as far as campaign contributions that showed up in the first half of the year. 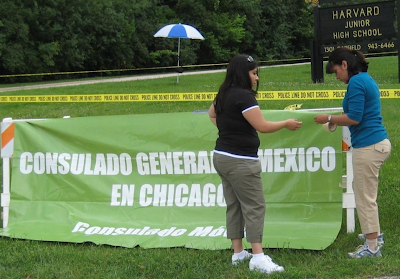 I imagine there has been fund raising since the beginning of July.

About $6,000 was spent in the 2004 campaign counting in-kind contributions.

Northwest Herald reporter Tim Kane wrote an article about other aspects of the tax hike effort.

= = = = =
The photo is of Harvard Junior High School, which was rented to the Mexican Consulate.