He told me that somehow I had dropped off the email list and, therefore, hadn’t received Abboud’s statements on the financial bailout.

From reading it, it appears that Abboud would have voted for the bill.

Here is the one that was sent out Monday:

“This is just another example of Don Manzullo’s failure of leadership and his inability to confront serious challenges. 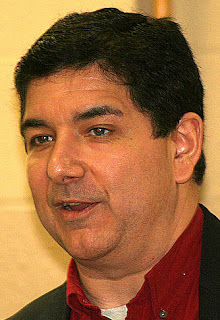 “This is not a time for politics, this is a time for real leadership that delivers real results. Don’s Manzullo inaction literally threatens the very security of every American.

“Look, voters’ do not like this bill; I do not like this bill. If I were in Congress I would have brought in the necessary expertise to craft the technical components and worked across the aisle to get a bill we can all sign on to. First and foremost, we need to ensure the federal government holds preferred equity position in the companies we rescue. By having preferred equity position we can attract private capital to offset the devastating contributions U.S. taxpayers are being asked to make right now. And it makes the bill a more attractive plan for Republicans and Democrats to sign on to.

“Unfortunately, I fear that Don Manzullo’s inability to work towards a solution that we can all sign on to will have truly dire consequences.”

Included with Monday’s statement was the following. The substantive part was dictated by Abboud, Carroll tells me.

“I apologize that you were not put on this email originally, I don’t know what happened. Bob has been following this process very closely, providing comment to many different news organizations over the last few days. We are glad to see someone is following this issue as closely as you are.

“Today you will be receiving a press release outlining his changes to the bill, and the serious dangers of adopting some of Mr. Manzullo’s alternatives – particularly his idea to include a change to the current accounting rules to remove the “mark-to-market” requirement.

“This is the proposal he floated on WTTW yesterday. Essentially he is creating a system that doesn’t require an investor to match his/her loan with equally valued collateral. This is exactly the kind of accounting that collapsed Enron.

“In addition, it is odd that he is proposing this when out of the other side of his mouth he is constantly pushing the integrity of the free market – this change in the accounting rules would take the free market out of this equation and essentially create a value structure that isn’t supported by tangible value on the marketplace.

“In short, Mr. Manzullo clearly doesn’t understand how financial processes work. I would find his positions amusing if his lack of understanding didn’t pose such incredible danger to the health of the financial industry, our economy and ultimately working families’ retirements and savings. This is another area, one of many, where Mr. Manzullo needs to be educated.”