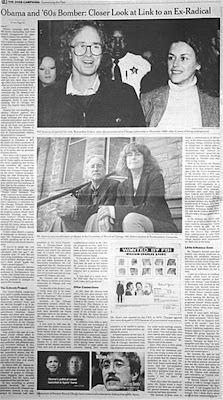 And the very day the issue finally surfaces in the New York Times, Republican Vice Presidential candidate Sarah Palin starts talking about Chicago’s home grown terrorist turned state payroller. (He’s a professor at the University of Illinois in Chicago. Is Illinois a forgiving state or what?)

Here’s the complete quote from Chicago Tribune’s libertarian leaning columnist Steve Chapman, who defended Obama with regard to his minister, Jeremiah A. Wright Jr.: 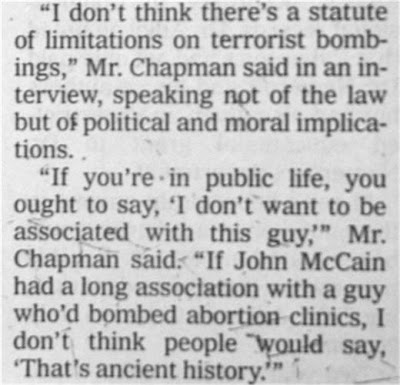 “I don’t think there is a statute of limitations on terrorist bombings,” Mr. Chapman said in an interview, speaking not of the law but of moral implications.

“If you’re in public life, you ought to say, ‘I don’t want to be associated with this guy,’” Mr. Chapman said.

“If John McCain had a long association with a guy who’d bombed abortion clinics, I don’t think people would say, ‘That’s ancient history.’”

And what did Ayers write in his autobiography? 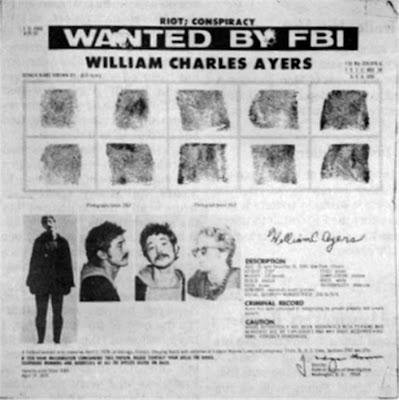 The [New York Times] reporter quoted him as saying [on September 11, 2001] “I don’t regret setting bombs” and “I feel we didn’t do enough”, and, when asked if he would “do it all again” as saying “I don’t want to discount the possibility,”[13], according to Wikipedia.