For McHenry County residents, it was inconveniently located in Schaumburg.

Here’s Greenberg’s take on the debate:

Greenberg Clear Victor at Forum
Asks, “Are you better off than you were four years ago?”

Republican nominee Steve Greenberg shared a stage with Democrat Melissa Bean on Saturday for the first time, and emerged the clear winner. The forum, hosted by the League of Women Voters, was held at the Friendship Village in Schaumburg. 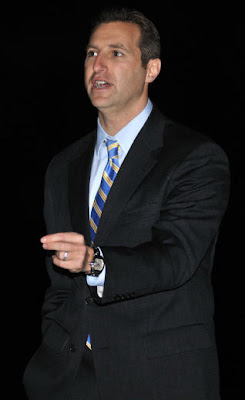 As Greenberg outlined his stances, Melissa Bean had no answer for why during this economic crisis she has taken $801,000 from the financial sector, the very sector she was supposed to be overseeing as a member of the Financial Services Committee. She also had no answer for why she had become the sixth largest benefactor from special interests in Washington.

“Are you better off than you were four years ago, when my opponent was elected?” asked Greenberg. He continued later, “I believe our better days are ahead of us. With your vote, I will be a voice for you in Congress.”

“It’s clear why Melissa Bean is afraid to publicly debate Steve Greenberg,” said Collin Corbett, Greenberg’s Campaign Manager. “Steve Greenberg has a clear vision for leadership and reform in Washington, which he showed today. He is a voice for the struggling families and small businesses here at home, unlike Congresswoman Bean who has proved to be a mouthpiece for the special interests.”