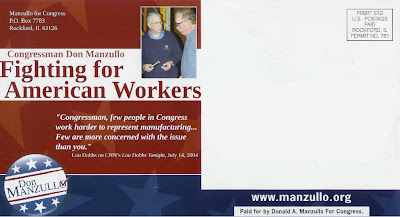 On the address side of this one is a quote from CNN’s financial guru Lou Dobbs:

“Congressman, few people in Washington work harder to represent manufacturing…Few are more concerned with the issue than you.” (July 14, 2004)

Manzullo’s Democratic Party opponent Robert Abboud has been trying to sell the idea that Manzullo is not dedicated to keeping manufacturing in the United States. 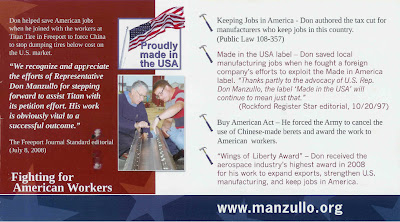 On the back of the post card, Manzullo tells of how he joined with Freeport’s Titan Tire workers to “force China to stop dumping tires below cost” in America.

The post card also touts Manzullo’s writing language to give tax benefits to manufacturers who “keep jobs in this country.”

It also points out that Manzullo won the “Wings of Liberty Award,” the “aerospace industry’s highest award in 2008 for his work to expand exports, strengthen U.S. manufacturing, and keep jobs in America.”

There were other items, as well, which you can see if you click and increase the size of the images.