The ex-reporter scorned the fact that none of the $700 billion would be spent before the election, nor would any that huge amount help liquidity. On the other hand, he praised the British Prime Minister’s plan to buy stock in banks, saying that would actually give banks money to loan. Now the US government is copying the idea, to the tune of $250, billion without admitting that the original plan would primarily benefit the institutions and individuals who caused the problem.

So, with that on my mind, into my in-box pops the following press release from Abboud:

WRONG AGAIN: MANZULLO CONTINUES LONG LINE OF POOR POLICY DECISIONS
Manzullo’s Failure to Find Courage to Vote for Bailout Could Have Been Costly, Luckily Manzullo Remains as Inconsequential as Usual

ROCKFORD – Democratic Challenger and small business owner Bob Abboud, applauded recent measures taken by Treasury Secretary Paulson to allow credit and capital to begin flowing in U.S. financial markets Wednesday, and hammered his opponent for ‘lacking the courage to act’, in reference to Manzullo’s no vote on the federal bailout package. 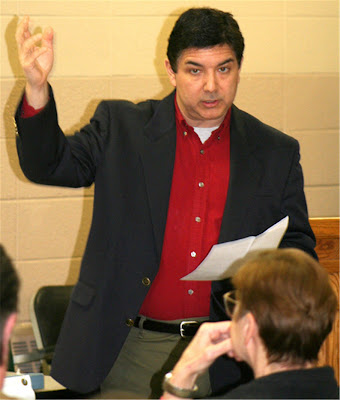 “With the stock market in free fall and people everywhere worried about the security of their savings, Don Manzullo thought it best to do nothing to help bring some stability to the United States financial system. Well, once again Manzullo was wrong – adding to his growing list of policy and leadership failures,” Abboud said. “The measures Paulson and Congress have taken have created the opportunity for credit and capital to begin flowing again. This action was absolutely critical.”

Abboud and Paulson are both residents of the Village of Barrington Hills, where Abboud currently serves as Mayor. Abboud said he knows Paulson well and was happy to see the Treasury Secretary utilize the same key strategies Abboud has been discussing in recent weeks to execute the federal rescue of struggling financial institutions to protect peoples savings, and insure credit is available to individuals and businesses.

“I was very glad to see that taxpayers will be receiving an equity share of the companies the federal government rescues, that CEO’s and other management of companies we rescue won’t be receiving their golden parachutes and that there was an increase in the deposit amounts insured by the FDIC,” Abboud said. “These are the things I have been talking about for weeks and it is a relief to see them implemented even before I get to Congress.”

Abboud said that no one likes spending $700 billion to rescue failing financial institutions. But the alternative is that small businesses, homeowners, and working families would be exposed to devastating financial collapse without this level of protection.

“If Don Manzullo had his way family after family would still be watching their life savings plummet, and small and medium businesses would have no access to credit or capital to grow and create jobs,” Abboud said. “Manzullo’s lack of courage and technical understanding during this crisis should be a warning sign to every voter in the 16th District. A warning sign that says this guy just doesn’t have the chops to confront our most critical challenges.”

Abboud has proposed a comprehensive energy and economic plan that will re-establish manufacturing as the strategic component to America’s economic security, and leverage the new energy technology industry to revitalize manufacturing in the 16th District, create thousands of jobs, give families relief at the gas pump and finally deliver energy independence.