I talked to Tom Eibel Saturday when he was walking Ken Bird Park in southern Crystal Lake with a letter informing him that the Crystal Lake Park Board had agreed to allow a T-Mobile cellular tower in the middle of the park if the Crystal Lake City Council agreed. (Yesterday’s story, complete with minutes of the park board meetings can be found here.)

He lives on Deerhaven two doors from the kiddy playland.

When I was state representative, I fielded cell phone siting complaints from rural McHenry County residents. County zoning officials refused to notify the neighbors who would be able to see the towers.

Not many neighboring residents were notified of the application for this Crystal Lake special use permit, but Tom Eibel and his wife lived close enough to get one.

He is not a happy camper.

I didn’t know he was going to be the one to sign a letter to his neighbors, but it turned out that way.

You will note in the letter that all of the public officials involved are named.

Anyone wanting to contract city council members may do so by going to Crystal Lake’s web site and clicking on the government tab. “Meet your city council” is the first stop.

To my surprise, I see park board members all have email addresses now. They did not when they were considering allowing the Gay Games to usurp Crystal Lake on a prime July weekend day.

Here’s the letter Eibel and friends are distributing:

I have become aware that T-Mobile and the Crystal Lake Park District have applied for a special use permit to erect a 75 foot tall cell phone tower in the middle of Ken Bird Park, located between Village and Miller Roads. This beautiful park is enjoyed by soccer, baseball, and football teams, joggers, dog walkers, tennis players, and even young children flying kites.

This area is currently zoned R-1 (residential single family) and does not allow for accessory structure heights exceeding 15 feet.

The City was required to notify residents within 200 feet of the structure. I received a letter in the mail on October 17. Why didn’t the Park District notify us of their plans prior to moving forward on the project? Residents outside of the 200 ft radius were not notified by mail. A small notice was to be in the Northwest Herald on October 11 regarding the date of the public meeting. The meeting will be held at 7:30 pm on November 5, 2008, at the Crystal Lake City Hall. All concerned Residents should attend this meeting and voice their opinions.

Concerns of residents and the parents of the children who enjoy the park include: 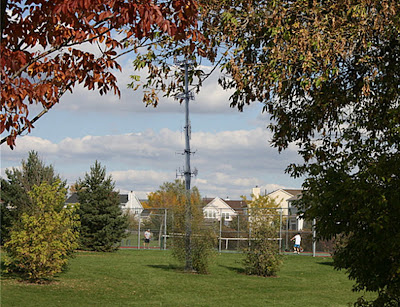 Studies regarding links between cell phone towers and cancer – Studies have shown that increased radiation in the area may affect the health of residents within one quarter mile of the tower. Children who play in the part would also be exposed to any additional radiation.

Decrease in property values – In addition to the adjacent homes, this may affect the entire neighborhood. A 75 foot tall tower will be visible throughout our community.

Environmental concerns – Birds and other wildlife may be affected by the increased radiation as well.

All concerned Crystal Lake voters should contact via phone, letter or email the following government officials and tell them not to approve the installation of a 75 foot cell tower in the middle of Ken Bird Park.

You can contact the Zoning Commission, City Council, and Mayor by calling City Hall at 815-459-2020. E-mails should be sent to comments@crystallake.org with “E-mail for” followed by the name of your intended recipient in the subject line. Letters should be addressed to City Hall, 100 W. Municipal Complex, P.O. Box 597, Crystal Lake, IL 60039-0597. 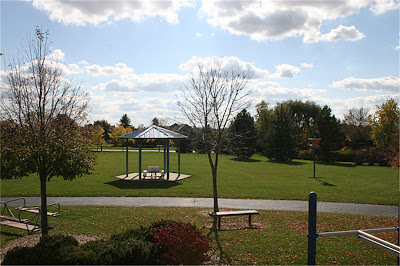 The application is with the Zoning Commission first.

The application will then go to the City Council.

Mayor: Aaron T Shepley should also be advised of your concern.

The Crystal Lake Park District Board of Commissioners must be advised that they should not have come to an agreement with T-Mobile, without first consulting with their residents.

The Crystal Lake Park District Board of Commissioners are

Letters to the Park District should be sent to: One East Crystal Lake Ave. Crystal Lake, IL 60014.

The special use permit should not be granted. The City of Crystal Lake should not allow this tower to be built in Ken Bird Park.

Fellow Citizens of Crystal Lake, if you don’t stop this project it could be the park next to your house next.

= = = = =
On Top Tom Eibel points up where the Crystal Lake Park District wants to put a T-Mobile cellular tower in the middle of Ken Bird Park. A test hole can be seen in the foreground in the middle of the 20 by 30 foot plot of land for which T-Mobile wants to pay $2,000 a month.

A picture of a cellular tower has been superimposed in front of the tennis courts at Ken Bird Park.

The closer up shot of the tennis courts was taken from atop the little playland structure. The cell tower is obviously superimposed.

Below is what it looks like south from the top of the playland. You can see Miller Road and and Lake in the Hills. (Why isn’t didn’t the park district agree to site the cell tower right on Miller Road where it might have been less obnoxious to parkside neighbors? Just asking.)

In the bottom photo you can see the houses to the east of the tennis courts.